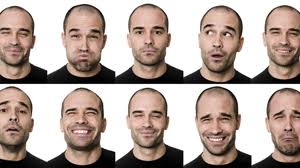 At the University I did communication studies as one of my subjects and I always liked non-verbal communication. As someone who is really enormously mirroring others non-verbal behaviours - it made me notice how often I do this. For instance when someone folds her arms and we have an intense conversation, I am also folding my arms. I can also listen with lots of attention - I'm the kind of person who at the end of the party didn't notice all the things going on because I was only paying attention to the people I was talking to.

Non-verbal communication can by via posture, eyecontact, gestures, but also movement or appearance - for instance having long hair as a man - what message does that convey?  In my communications book it is stated that 70% of all communication is non-verbal and that non-verbal signals are 5 times stronger than verbal.

So how does this work for online facilitators and trainers.. What should you do as a facilitator or trainer without this body language? You have no signals whether participants are falling asleep ... Does this mean that you can more easily focus on the content without being distracted or does it rather mean that you miss 70% of the communication and have to deal with 30%? I think this is one of the reason that there are not many trainers yet who have stepped up to facilitate online - they feel lost online - as facilitating in a room where the light is turned off.


Hanna Bervoets, a Dutch columnist had an interesting column last Saturday in the newspaper about nonverbal digital communication. She states that there is something like Dinoco - Digital Non-written communication which she explains as the behavior around sending digital messages that conveys an extra meaning. As an example- someone sends you accidentally a message that was intended for another person which means he (unknowingly) is thinking about you. Or another example - someone sends a tweet and removes it immediately. Meaning: he is nervous or unsure. I found this to be great examples and full of recognition as an online facilitator. If you have made many online hours, you can read a lot between the lines. So there is certainly a kind of meta-communication online, similar to non-verbal communication that you can learn to read as facilitator. I can see from the way of writing of emails from people I work with when they are very rushed / stressed or not. I also know often on a  Skype call when someone is multitasking. What I don't know is whether this requires a new kind of intuition?

Apart from reading between the lines, there are more ways to capture what is going on in a group and what participants are going through which is not communicated in the text. The 5 most important non-verbal channels of an online facilitator are:

Joitske, I found myself nodding in agreement with all your ideas. There are a couple of small things I could contribute.

First, use text body language. Like emoticons, we can include more cues that we traditionally have conveyed with body language. For example, I really found myself leaning into the screen as I read your post (as it, it really caught my interest.)

I rolled my eyes, however, with those age old stats about verbal and non verbal communications, because that was a very limited study that was about the use of non verbals in stress situations. (I'm on the road, but I have a file of articles about that at home.)

The last bit is remembering that while online communication is verbal, visual or textual, we still have bodies. I've taken to inserting stretch breaks in online meetings, and even cues in written instructions in courses such as "before you tackle this assignment, take a deep breath. Maybe go for a walk, away from your screen. It might help you focus."

These days I think we are sitting too darn much! :-) (Of course, I had to include an emoticon!)

Virtual chocolate to you...

Have you ever facilitated online where you noticed that your participants had different personalities? Some quiet, some reflective, some boisterous, some humorous,...?

What made you notice?

The more I facilitate, the more I start to think that there is such a thing as verbal 'body' language - we just don't quite know how to decode it yet.

What I do as facilitator, is to make sure I read everything everyone says. By doing so, I start to recognise personalities, and am able to respond to it, the same way as you would to physical body language. I recognise it in the choice of words, tone of 'voice', presence/absence,... many things. Look at Nancy's post, for example: Can't you just see her, busy composing her message, in your mind's eye?

Have you ever had the same impression about online written-verbal cues ?

Hi Nancy and Gerrit, thank you very much for your comments. I agree that we have bodies :). i wonder however how we can help people find a balance - it is often in their own hands?

Gerrit - I agree that you have to get to know your participants. However, when it is a large group, it is difficult to read all. That's still a questions to me whether you need to read all. I tend to read all but some more carefully.

We try to work with between 15 and 20 participants, the course being an online course on online facilitation, based on Gilly Salmon's 5-stage model and developed by the guys from University of Cape Town. (http://opencontent.uct.ac.za/Centre-for-Higher-Education-Development/Centre-for-Educational-Technology/Facilitating-Online)

Reading everything for me means I get the maximum opportunity to 'tune in' to participants' 'online body language'. It also helps me discover meta-themes in the various conversations. Guess it could get tricky with many participants.

Still learning lots about online written communication, though... Like all of us, right..?