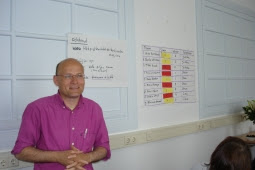 Today a little bit of a blogging day, catching up with my bloglines and blog ideas.. This is blogpost number 301! It starts to function as my memory, my brains are already getting lazy after I blogged something. So in future I will probably need the search function on my blog more than my memory...

With Steven Scheer and Simon Koolwijk I co-facilitated a training to introduce various tools for e-collaboration at kontakt der kontinenten. Though I had become a little allergic to training throughout my career, seeing little application of all that was learned -and more and more attracted to supporting learning through communities of practice- this day made me realize training can be powerful for learning new things and especially for lowering the threshold for people to experiment with various new tools. We did a virtual team assignment, using a NING platform as an example of a web-based discussion forum, skype as VoIP and Unyte as an example of a screen sharing tool.

It was interesting to see that people got a chance to talk about their use of tools (and that there were a couple of previously unidentified champions) and their anxieties. An important aspect of such a day may be to make use of technology a topic for discussion. One of those anxieties was whether working online would make everything 'faster' again. Another one was about security, fear of spam, viruses etc., but also fear for undesired contacts with the negative connotation of the word chat (the fact that one participant was immediately invited by two unknown men after signing up for skype did not help). 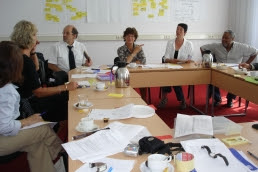 What I personally learned is:

Thanks for these great notes! Love the photo of Steve - and glad to connect you with him! Great stuff here.

Forgot to add - tell me more about
Unyte ... what did you learn. It looks like something I've been searching for.

Hi beth, this is Simon not Steve :) Guess they are both (almost) bold! Unyte is a great tool. Unfortunately one group did not manage to connect with 4 computers, the other group did. The free account are limited, but it might be worth to be something for it. The participants really appreciated this part of the training!