Re-connecting with Modibo, Soledad and Jamlick 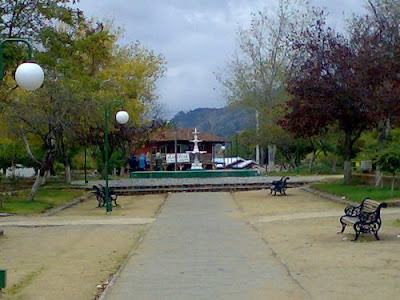 (picture by Ptorres)
Yesterday I got a message on Facebook from Soledad, a girl I met in Portezuelo, Chile, in 1987 during my practicals (don't start counting how old I am!). I couldn't remember Portezuelo, because I had started to twist the story. When people asked me where I worked in Chile, I mentioned San Bernardo, Chillan and Temuco, and I believed I worked in Chillan, forgetting that it was actually Portezuelo, a village near Chillan. As soon as I found this picture via google maps, I remembered Portezuelo, the vineyards and Soledad with her long beautiful hair. Reconnecting on facebook means being able to hear her whole life story, it's like watching a film. She is married, has a daughter and is composing music and writing stories and poems! In similar ways I reconnected with Modibo (via skype) and with Jamlick (via a weblog project). All people I met across the globe in the writing-letters-with-stamps-age. Somehow, I never managed to keep writing letter for a long period.

The natural limit to friendship circles is said to be 150, the Dunbar number. The question is whether online social networking will increase that number. I think it will- we can keep much lighter connections with more people. I am able to leverage my 'old' face-to-face friends contacts online. At time I wonder whether we are too optimistic about the possibilities of internet, but when this kind of things happen, I can't help raving. Thanks to Facebook and skype these people with whom I lost contact were able to track me down. We can keep loose connections in future. Know how they are doing, and connect when possible. It's still not possible to be in close contact with all the nice people I knew in the past, Jamlick and I called each other on the phone twice, but we did not keep this up. However, I am now aware of Jamlick's project and Kenya, and it will be easy to meet up if your schedules allow it one day.

Maybe the 150 number has to do with "close ties" while social networking allows us to leverage what Mark Granovetter called "weak ties" (which, in some situations are more valuable).

I'm not sure that you can have 150 close ties to be honest. Maybe the definition of weak and close ties is also shifting. I'll have to read more about that. I agree you can have more weak ties online!

after being up until 1:30 in the morning on Crackbook last night, your post caught my eye.

What strikes me is that, although we may keep many loose connections, I think that we must naturally gravitate towards certain people whose interests mesh with our own. But I'll have to think more about that . . .

Hi Lorraine, thanks for that observation. I have been thinking about that too. These examples are the opposite, people I met simply because we were in the same place. But moving more online- do we go for the easy contacts with like-minded people only? could be, and is that positive or negative?

The Dunbar Number is supposed to be the maximum sustainable group size for a community, above which the community fragments. That's not the same as either an individual's strong ties or weak ties.

Networks are different from communities. They are about Granovetter's weak ties and 'degrees of separation'. Granovetter's data revealed the power of having a non-redundant network, i.e. knowing people who don't know each other. Your network is what you use for answering "does anybody know..." questions.

@Gordie I understand the Dunbar number as the maximum number for you personal network (egonetwork), not for a community. A community might be larger, but then not all members will have ties to all other members. It can still be a community I believe.

I just went back and checked Dunbar's original research. His 1992 paper was called "Neocortex size as a constraint on group size in primates" but Dunbar does switch freely between the terms 'group' and 'social network'. :-(