Obama's use of social media: what can we learn from it? 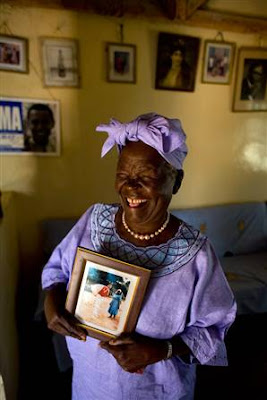 The netsquared thinktank question is this time: 'What was the best example or lesson learned about leveraging social media from the political campaigns this year?'

At first, I didn't feel like responding. I have followed the campaigns of Obama and McCain filtered through the Dutch news. But it's a nice opportunity to find out more about how Obama leveraged the social media- I have heard it was a great campaign and his team made good use of the media in general and social media in particular.
I'm a fan of Obama (like 90% of the Dutch I believe!), because of his ideas but also because of his grandmother, who is a Kenyan, living in the Luo speaking part of Kenya. This is where I lived two years working with farmers on irrigation between 1990-1992, near Lake Victoria. When I saw her in a documentary, I really recognised the type of homestead and could understand some of the Luo language she speaks. I also lived with a Barak family (Barak Odwar). Kenya is proud! It would be great to have a presidential swap for a week between Kenya and the US! (like in the TV series 'your wife, my wife' or 'teenage swap' puberruil XL?)

But back to social media. What I found out from this blogpost on the blog 'cooler insights' is that he has a very web2.0 friendly website, with links to all kind of online hangout places like facebook, twitter, etc. which shows they understand it is not enough to think everyone comes to your website, but that you have to go out and be where your people are online. Make it easy for twitterers to stay updated. Not only myspace, but also on migente, a social network for latinos. Check it out to see a web2.0 friendly website (miss the tagcloud though!).

It seems is not only used to spread messages around, but also to engage with people online, to listen. Via a Dutch weblog called 'civil servant2.0' I learned that Obama's team doesn't simply use social media to campaign, but experiments with a site where you can share your story what these elections mean to you and has a weblog to keep people informed what happens till the transition of power.

My personal lesson is that it is not a social media strategy, or the wider campaign that made Obama win. It is Obama himself who did it. Don't overestimate the role of social media (or campaigns in general for that matter). A crap candidate with a good social media strategy is still crap. Social media can help and support you when you have a strong service or product, but can also amplify weak services or product. At times I have the impression that is forgotten and that people think a web2.0 tool will automatically give you a good reputation. Take the example of a weblog: a weblog can also worsen your reputation because your work and ideas will be exposed.

To summarize this in 3 lessons:
1. Go out to where your audiences are online, don't assume they come to your website or portal
2. Make it two-way communication, not only talking, but also listening
3. Make sure your service or product is strong, otherwise you will amplify your weaknesses
By the way, not only Obama is using twitter, you can also get news about the Ghana Election on twitter by following Ghanaelections.
Geplaatst door Joitske op 11:27 AM

Those who think that Obama used the web just to be elected are missing the point. He turned his voters into a community. Do you really think he will drop the ball now that he is president?

mm, no, I think that is the same think I was saying?

Oups. It looks like I got mixed up in my comments. Wrong post.
Sorry Joitske.
And yes, you are saying the same thing. Obama is indeed experimenting a new form of democracy, not just using web 2.0 tools.