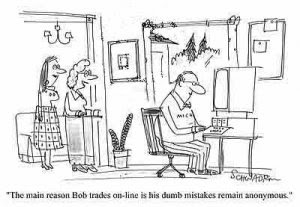 Maybe we need to distinguish levels and types of mistakes? Or rather talk about experiments? Or is it more worthwhile to improve feedback? And how do we learn from mistakes as organisations?
Geplaatst door Joitske op 8:59 PM

Thanks for mentioning The Mistake Bank and discussing one of my favorite topics.

It's funny you mention Pres. Bush's unwillingness to admit a mistake. His successor has already shown he knows how to learn from things that go wrong--and that is facing up to his part of the error and admitting it. In Pres. Obama's interview with NBC News last night he took unconditional responsibility for the Daschle confirmation mess. This shows me he is a strong learner and will be a great President.

Oh, and as you would expect, there is a post about it, and a link to the video, on The Mistake Bank.

Hi Joitske,
I liked your reflection (yes that's a :-) feedback); sure learning from mistakes has great potential but talking and analysing (openly) mistakes is so often so sensitive; I feel that installing a true culture of feedback is already challenging enough.
Nadia

@nanadia, thanks for the feedback on my reflection ;). Talking about mistakes is hard indeed, but on top of that sometimes 'mistake' seems so black and white, talking about doing things different may be easier?