Two inspiring stories by digital natives with a cause 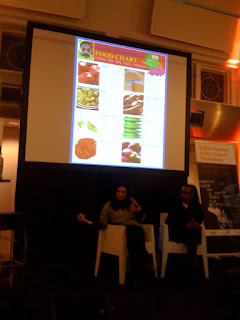 I attended the HIVOS 'thinkaton' about digital natives with a cause and activism2.0. Everybody in the room already believed in the power of a click! But we need the stories.

There were two very inspiring stories. The first by Juliana Rotich, the Program Director of Ushahidi (Kenya). Ushahidi is a well-known success and well-known example, nice to hear the story behind it. Ushahidi is an open source platform that allows people to share information in times of crises or elections (and sometimes elections are also a crisis!). The information is then shown on a map (the online version which can be used without having to install anything: crowdmap.com was reportedly deployed 3500 times already!). Juliana Rotich explained how it became a success because of the link between the people of globalvoicesonline and a voluntary group of coders and translators. They were able to use their already built online networks to spread the news about ushahidi in Kenya where it was first used during the election turmoil. Interesting to hear about the crucial success factors. In the discussion it was several times mentioned that social media have played the role of amplifier. The speed with which news, information or stories get amplified depends on the resonance and relevance of the issues.

Jasmin Patheja, was the other digital native. She is the initiator of the
Blank Noise project (in India), a collective movement that addresses the problem of sexual
harassment in public spaces. I learned a new word which is eve- teasing. It is the intimidation of women in public space before it is called sexual harassment (my interpretation). On their blog you find a long list of what they understand by eve-teasing. Jasmin started photographing men that were eve-teasing in her opinion and put that on her blog. She felt very empowered by having her blog to post these pictures. She got a lot of comments and started blogathons. It articulated the issues around eve-teasing. It made men and women aware and think about their behaviours. All kind of actions were started like the invitation to send (a picture) of the cloth you were wearing when you were 'eve-teased' (don't know whether it is a verb too) or the action-heros. Her challenge is to think through whether they want to constitute a non-profit organisation based upon this spontaneous movement.

Some things struck me: