I had the pleasure to attend a presentation by Julie Ferguson. Julie is doing research for the university of Amsterdam (VU) 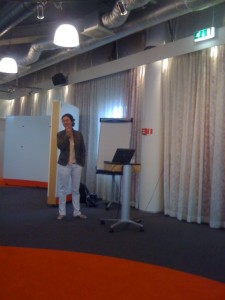 into (micro-)blogging as part of her PdD research about knowledge and power in the development sector. The research has not yet been published.

This research had the goal to investigate how knowledge related to a shared organising vision (in this case (ICT4D, about ICT for development). It analyzes the behaviour and perception of the bloggers. She interviewed 7 professional ICT4D bloggers (used interviews to identify those) and analysed their blogs. She has some remarkable conclusions.

Blogging has some so-called 'affordances':

Because of these affordances blogs may enhance participation in ICT4D policy and practice, creating an organising vision. It has the potential to close the gap between the discours at policy level and the discours at country level, by organisations and 'the poor'. This was what the bloggers believed in. In practice things were slightly different. The findings:

All bloggers basically blogged for themselves, not for marketing or other purposes. Blogging helped them in sense-making, development of ideas and reflection on their practice as 'reflective practitioners'. Blogging may hence be an important activity for professional development of knowledge workers and can help develop their professional identity.

Blogging outside the organisational boundaries

Bloggers contributed to a tunneling vision instead of organising vision

The idea of creating an organising vision through participation on blogs was not found through analysis of the blogs. The number of comments were relatively low (an average of 1,1 comment per blogpost); even though there were quite some readers. Most of the comments were positive, so the fear for negative comments that many organisations have was not confirmed by this research. (if I recall well, she said only 2% of comments were negative). On the contrary, many comments were appreciative like 'What a great post!'. By lack of real content interaction, the blogs were most of all a reflection of the individual professional bloggers, who we may see as 'knowledge-enterpreneur'. As a result, there was an overall fragmentation of ideas, instead of convergence. She could not discover an emerging organising vision. (it was not clear to me whether the bloggers were reading each other's blogs). Rather, ideas went into all kind of different directions.

However, despite the fragmentation of ideas, there was a new discours, outside the accepted visions of the organisation. You might say there were new lines of thinking, new directions explicited by these knowledge entrepreneurs. I asked Julie whether they influenced actual practice or policy, but that was outside the scope of her research. In some cases, she did get that impression though, that the blogs did influence policy and practice. This means that blogs can be a good tool for knowledge-entrepreneurs to stimulate innovative thinking within a sector. Though the research focused on the fragmentation, I do see this a something very positive.

Facilitators: we are needed!...

Simply by bloggers a new organising vision does not emerge spontaneous. This is the part where the obvious comes up: there is more needed than blogs to cultivate a collective vision, eg to cultivate a bloggers community, organise meetings, discussions of ideas presented in blogs. Think of what Global Voices ("the world is talking are you listening?") is doing to amplify the voices of bloggers in different countries. Also a teamblog might be an interesting alternative, like thes teamblog of NVO2. A teamblog might be more conducive to read each other's contributions than individual blogs.
Geplaatst door Joitske op 11:11 AM

Interesting read. From my experience the results apply for many corporates as well. For me as blogger especially interesting, as you constantly ask yourself, whether it is worth it, how the impact is doing, etc.
regards
gerald

Nice to hear it applies to many corporates as well.. Do you feel you are a knowledge entrepreneurs?

I am a Knowledge Manager in Ericsson (90.000+ employees in 150+ countries). I claim to execute and contribute towards internal and industry Thought Leadership. Entrepreneur? - being employeed, my financial risk is limited.
Perhaps Intrapreneur.
regards
gerald