I have to confess I read my mail on my biclycle (using my iphone). Two years ago I didn't have mobile internet yet. Twittering and mailing was place-bound to my computer. As a result I was using the first hour behind my computer to work through my mail. Now I can also read tweets and blogs. A good reason for me to read mails while travelling on the bike or in the train.

Visiting a friend I discovered reading bedstories to small children is not the same anymore. Now there are all kind of nice apps for children, with things to click on and sounds and noises. Or you can have surf for youtube videos (like   this one of the princess and the potty. Comes in handy when you need to do something for yourself.

The workfeud app has made scrabble a favorite game again.

Sylvia Witteman (a Dutch writer) wrote a column about her fixed telephone line. Everybody is calling on their mobiles, except her mother who says:  "I just like to call you without knowing who will pick up the phone". Unfortunately nobody answers, since they only answer their own mobile phones... 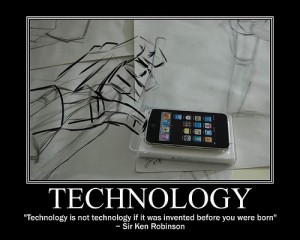 On the photo you see the following quote: "Technology is not technology if it was invented before you were born". There is a difference in the way people embrace new technologies (or not). Developments in technology are also incredibly fast. Someone told me: "I don't have a clue how I can find my way through all the new tools, I don't understand how you do this!". The examples I shared show that new use of technology also brings new habits. And the habits sometimes inhibit adoption of new technologies. Think of sms, people have started to communicate more often or on the contrary call less. Hence it is sometimes not an improvement for all, think about the grandmother who would like to call being surprised by not knowing who answers the phone. Though this morning I read on Facebook of a granny using Skype to exchange kisses with her grandchildren. So it might also be an improvement. I wonder what determines whether you try something new? Some elements are: what your friends do (I was invited to wordfeud games and my daughters are fanatically using what'sapp while I don't). But also whether you like experimenting or whether you perceive the benefits. I have long resisted the microwave, feeling it is unnatural to radiate your food...

For organisations it is hence even more difficult to stay abreast with all new developments, like social media. Especially when the management team is slightly older or less experimental, after all management has a large influence on collective habits (culture- the way we do things around here). The way new media should be used may also be at odds with the way the organisation works. All this may lead to a situation where the organisation is missing new possibilities to network, innovate, profile themselves. One afternoon talking about social media is not enough to bring about change. In january we are starting a trajectory with a new organisation working during half a year exploring new media and how this may lead to new ways of organising within the organisation. I'm very excited and hope that we can manage to change some practices. I think 6 months is quite a short trajectory, but hope we'll get far.
Geplaatst door Joitske op 11:15 AM

Indeed, "yesterday" and "today's" technology has a lot of difference between them. It's changing rapidly in the blink of an eye. It's affecting our lives greatly. I enjoyed reading your point of view. Thank you for sharing!