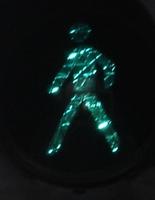 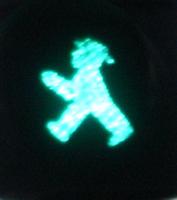 Last week we visited Berlin. In Berlin it's hard to escape the story of the 'ampelmannchen' at the trafic light. The traffic light man (the right picture) of former Eastern Berlin was designed in 1961 by Traffic Minister and psychologist Karl Peglau. He wanted to create a figure kids could identify with and be drawn to. East German schoolchildren sang songs about the Ampelmannchen during their school lessons on traffic safety.

After the fall of the Berlin wall in 1989, East and West Berlin were reunited in 1990. In 1994 Berlin began pulling down all the Ampelmanns and replaced them with the West German version (the left picture). Though the decision was based on the outdated electronics of the GDR’s traffic signals rather than aesthetics, the move quickly came to symbolize the tendency to discard East German society. Easternerns have become angry and a sort of protest movement started. The figure has now survived and been commercialised.

See http://www.wm.edu/so/monitor/fall99/paper3.htm for a story by Laura Koetter of 4 weeks research into perspectives on the reunification. What's interesting in this story to me is that it seems that a general feelings by Easterners of cultural domination by the Westerners is channelled through the symbol of ampelmannchen. Though after the fall of the wall, the easterners were craving for anything western, today, many easterners reevaluate the achievements of the communist era like the entitlement for women to hold the same jobs as men. So the fight for ampelmannchen may represent a deeper inter-cultural conflict. A true reunification must recognize the contributions of both cultures. And this is the same for learning processes between cultures, there should be appreciation for all cultures involved.

At http://www.ampelmann.de/ though, another perspective is stated: the media like the story of the ampelmannchen to demonstrate the difficulties of East-West Berlin's reunification. It could also be seen it as a commercial movement by AMPELMANN GmbH (an Eastern company selling all kind of ampelmann stuff).
Geplaatst door Joitske op 1:46 PM

Hey, you have a mighty fine blog here. I have a site relating to dog breeder. All kinds of info about dog breeder.