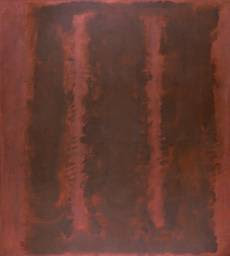 We visited Rothko's room at the Tate Modern Museum in London. The museum has lots of kids activities and since my children don't speak English, they gave them the most 'pictural' assignment. They had to use stickers depicting emotions and put them on a picture of their head. They put up lightning, bricks and other depressed images. They drew snakes and spiders. They were also asked what their feet, eyes were doing and their feet felt like 'running away'. Personally I didn't really know what to think of Rothko's paintings, but when I read the explanations, I was struck by the way they had felt like Rothko's intentioned effect.

In the late 1950s, Rothko was commissioned to paint a series of murals
for the fashionable Four Seasons restaurant in the Seagram Building on Park Avenue, New York. He set to work, having constructed a scaffold in his studio to match the exact dimensions of the restaurant. However, the murals were darker in mood than his previous work. The bright and intense colours of his earlier paintings shifted to maroon, dark red and black. Rothko was influenced by Michelangelo’s Laurentian Library in Florence, with its blind windows and deliberately oppressive atmosphere. Rothko commented that Michelangelo ‘achieved just the kind of feeling I’m after - he makes the viewers feel that they are trapped in a room where all the doors and windows are bricked
up, so that all they can do is butt their heads forever against the
wall.’

An illustration of the power of images and colour, working even unconsciously (on children). Also nice to see how different questions (stickers versus the verbal question: what do your feet want to do?) can bring out the same emotions but add some intensity/relief. I think that's what photos/videos/audio can do to online text interaction too.