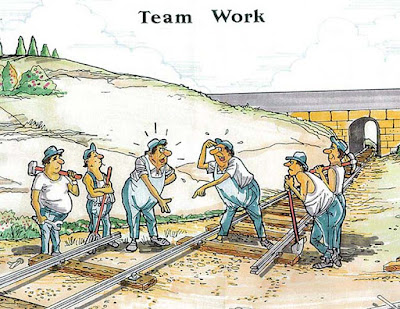 (picture through the reality and fun blog)


I've been working with 3 Intercultural teams composed by people with various nationalities and I've been part of a 100% Dutch team, all teams of 6-8 people. The Dutch team has used a learning history to learn about their teamprocess. The 3 intercultural teams have done an individual self rating followed by a group discussion of their teamwork. The rating sheet I prepared for them was based on the definition of effective groups by Harris.

Effective groups:
Produce what customers want
Are able to do it again
Do it in a way that makes the members of the team feel good
(Harris, 2005)

It was interesting to see that the Dutch team had more issues of different perceptions of the work at hand and approaches to deal with it than the intercultural team, as you would expect the opposite. In a way, the Dutch team had more differences to bridge. Whether we all understand the Dutch way of greeting each other doesn't help you, when you have a different understanding of the way to work on this particular task.

Looking through the lens of the team development stages of Tuckman, two of the three intercultural teams managed to get to a level of effective performance, the third group seemed to still be in a kind of storming phase, and never got to the level of high team performance. Neither did the Dutch team. However, despite the fact that these two teams were not at the performing stage as teams, they managed to perform the task quite well. I guess this is my personal learning point- that you can have a sub-optimal teamprocess- but still perform a good task. The downside is that in these teams people are happy when the task is over and eager to depart! Another learning point is that taking time for bridging the difference is often hard when there is a lot of work to do, so it's tempting to just continue focusing on the task.

Have you ever been in a terrible team that did a wonderful job?
Geplaatst door Joitske op 8:09 AM

Email ThisBlogThis!Share to TwitterShare to FacebookShare to Pinterest
Labels: teamwork

I like the simplicity of the Harris definition - what is its' source?

Hi Michael, I checked but couldn't trace the full reference.. I wrote it down in 2005. Googling I found a Robert, Bill, Cheryl and David Harris so I guess the name it too general!

In a teamprocess y need the subtile blend of tension/competition and partnership/comfort. Massive overdose of either results in war or sleepy cosyness. Fortunately, intermediate situations are most common so the work can get done!!!!
From China

Thanks anonymous! In crosscultural situation I have observed the blend tends towards competition/tension though, so that's something to really watch out for