Everyone is a non-profit?

This month's question of Netsquared is: What do you think the role of nonprofit organizations is in the changing world of social media? They start off with this video of Clay Shirky answering the question. Well, if Clay Shirky has answered it, what can I add?? He is basically saying that the lateral connections that are possible as a result of social media are far more radical than the changing relation between non-profits and their members. So the question for non-profits is: What do you do about those lateral connections? Which are beneficial to us or to our cause? Suggest to them that you, 15 people, could get together and work together. You can watch Clay Shirky explain it in the video below.

So what do I think? I can answer this for development organisations, as that's the sector where I have experiences. In a way social media make it easier for each individual to become a non-profit. We can all start a fundraising session on our blogs, we can organise a twestival for a charitable cause. Is this an important change that development organisations should watch out for?

This is ofcourse a different situation than Clay Shirky talks about. These private initiatives are not using social media. Are not connected and are not sustainable. So what could be the role of the professional non-profit development organisations? Now some thinking outloud; there could be two ways if professional organisations see a role for themselves to create synergy:

I'm not sure this makes sense to the original question or is too specific to the development sector. I guess in our case we cannot assume that we are all a non-profit. But we can also not ignore the fact that we might all become a non-profit in the future, working voluntary towards causes we have some emotional ties with. 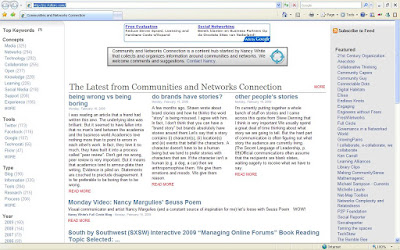 Tony Karrer and Nancy White have been collaborating to make the communities and networks connection website which brings content from various places the web together on the topic of communities and networks. Today is the official launch. My blog will be part of the network of blogs feeding into the website. I'm happy that I'm part of it because I seem to be doing a lot of different things, but this is the core of my work and expertise.

The site is similar in structure to the elearning site. I'm not sure how I will use the site, but I guess I will add the feed of the site to my RSS reader. As Tony mentions: "it is a network to form something that's not quite a community. I see it as being aimed at the 95% of people who don't subscribe to blogs but are interested in this content. It's a way they can more easily find that content. It's also an aide to bloggers in terms of organizing their content."

Friday 13th was well and safely spent in Utrecht where ICCO organised a session with David Weekly, the founder of Pbwiki. I wrote a somehow faithful summary for the icollaboration weblog (which is starting to look more like my blog than a teamblog...but never mind since I believe in making what's happening in the group accessible online!).

I will use this space to elaborate more on my own thinking and my sceptism. Though I'm a social media adopter, I also have my reservations. For one thing, it was interesting to understand from David Weekly what the online wiki niche is. Large companies have their own online packages and stuff (like sharepoint) but that wikis like pbwiki come in handy for cross company collaboration. People in large companies are setting up wikis because the other applications run behind firewalls that are not accessible to partners in other companies. In development, this is a different case. Large organisations may have applications, but smaller development organisations in the north or organisations in the south may not have invested in any systems. Wikis (free or for a small sum of money) are then a good solution that empower people to set up wikis to collaborate with others online. If you know how to work with wikis and have a certain level of access to the internet that it. Easy and free= empowering?

However, I have the impression that so few people like working with wikis and are comfortable working with wikis that the real revolution that Shirky promised, worldwide collaboration at scales we have never seen, is still very far ahead for development. The wiki examples are more online libraries build by a few enthousiastic persons than representing a new way of collaborating. It looks cool to put a conference online is a wiki, but how does it support learning and decision making? Maybe I'm putting my expectations of wikis too high in a way. And we may not have investigated it enough.

My worry is that if development organisations set up wikis to do the same work they used to do- it might not change anything substantially in the distribution of powers in the current development process. I guess that needs more, a vision of what to build or collaborate on (like wikipedia had ofcourse a great vision of becoming an online encyclopedia), and a process to bring stakeholders together around that vision in a new manner. Or the other way around, having a spontaneous collaboration. But maybe a much larger group needs to be comfortable working with wikis and other collaborative tools before that happens. Being overoptimistic may be counterproductive.

Ofcourse a wiki is only a tool, like a hammer, and anyone is free to use it as he/she wishes. But somehow the tools seems really powerful in the hands of a community. Like the km4dev wiki is a growing resource and dynamic repository. But it's not easy to stimulate people to make their hands dirty. And many may learn more from the verbal interactions than looking at the wiki so we should not overestimate the importance. It's a gut feeling that we should not measure change by the number of wikis, but by how the wikis changed the participation in the processes, and the truth is that we might exclude people too. I'm fearing too that partners organisation may start wikis because they have the feeling some donors are suddenly into wikis. But that may be diverting attention from what we should really focus on. Any ideas? Do you share my concerns?
Geplaatst door Joitske op 4:27 PM No comments: 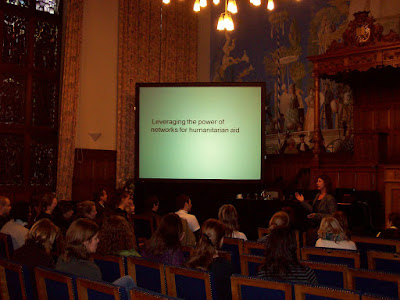 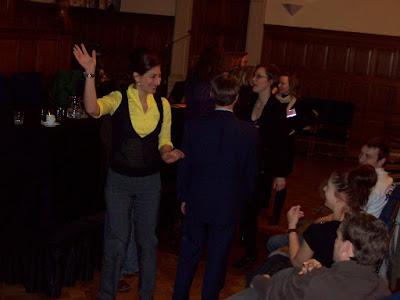 On Saturday I did a session about networks and communities of practice for the alumni of the NoHA masters. The NoHA masters is an eighteen months course in international humanitarian assistance, co-organised by 7 European universities. Since their interests in networking were very broad; including personal networking strategies, network facilitation and working with networks in the field of humanitarian aid, I started with an exercise about self-organisation and an introductory presentation. In the exercise I asked 10 volunteer to line themselves up according to ascending age. This was easy for them to do, and shows the self-organising power of humans. If you understand this, you will work differently with networks.

After this, we discussed in smaller groups on the basis of various questions. How are we using networks in our work for humanitarian aid? How could we leverage them more? What are the pitfalls? And what are our personal network strategies? In my group, I noticed that not everyone is convinced that you can learn how to network. I don't consider myself a natural networker, but I've learn to network professionally. An interesting case was shared of a coordination meeting between humanitarian aid organisations that continues for years, and doesn't not seem to yield much value to the participants in terms of learning and innovation. Ofcourse, coordination is necessary, but it would be an interesting challenge to see how we could make more of those routine/boring gatherings that all participants see as an obligation.

Afterwards I had nice discussions with the leading committee of the alumni association. Their biggest challenge is to foster ties between the different years and to focus on the practice when members are working at many different levels, varying from field to policy level. Miguel from Spain raised the cultural differences at national level. Cultures (at national but also organisational levels) differ in their inclination towards professional networks and associations and the types of networks you invest in. In Spain for instance, the kinship networks (families) are very important and people invest quite some time in those. In the Netherlands, associations thrive and it is common to take up a voluntary position. Maybe we need to distinguish levels and types of mistakes? Or rather talk about experiments? Or is it more worthwhile to improve feedback? And how do we learn from mistakes as organisations?
Geplaatst door Joitske op 8:59 PM 3 comments: