Use of Smartphones and exhaustion: the case against mobile learning?

Last Friday I had a dinner with 3 colleagues, our yearly dinner. We talked about the storm on Thursday which caused the complete halt of the train system in the Netherlands. I was part of a group which exchanged via a Whatsapp group whether to cancel our dinner. The group had such a flurry of messages which made me feel very unproductive in my work because I had my smartphone lying next to my laptop, and every time I looked at the new messages.

My personal app policy
One of the colleagues asked me: well, you must have an awful lot of whatsapp groups? He was surprised when I answered that I try to avoid work-related app groups. The reason I avoid it is because I don't want to work continuously on all my client cases, but want to have specific times that I choose to work on these client projects. In our courses we don't start whatsapp groups, unless the participants take the initiative and have a clear purpose for the group. Last Monday I talked to a teacher who said the same thing about Whatsapp. He does not want to participate in the group of his students because it would mean an awful lot of questions about homework during the weekend or late hours.

What's the influence of smartphones on work/life balance and stress?
I found a study looking at the influence of our smartphone use for work purposes and its influence on stress and burnout. The paper is called Smartphone Use, Work–Home Interference, and
Burnout: A Diary Study on the Role of Recovery. The paper is written by Daantje Derks* and Arnold B. Bakker Erasmus University Rotterdam, The Netherlands. In this study 69 smartphone users completed a dairy questionnaire for 5 successive working days. All participants were required by their employers to use a smartphone.

The need to recover from work
Our workload is going up. Many employees have a smartphone, which may or may not be paid by the organization. Organizations increasingly expect employees to immediately respond to work-related messages. The norm is becoming that individuals should be available to others anytime and anyplace. Employees feel a pressure to respond to messages coming through their smartphones (with plings!) and it derails their attention. Furthermore it blurs the boundary between work and private life, even more so when employees are highly committed to their work. The authors use the term Work-Home-Interference (WHI), defined as a negative process of negative interaction in which the employees experience pressure from work and private life which is hard to reconcile. This may be time conflict, role conflict or stress taken from work which makes it hard to relax at home.

How to recover from work
Smartphone users may find it even harder to find recovery time in the evening. A core component of recovery is the employee's sense of being away from work: to detox from work. It implies more than just being physically away from work. It suggests that the individual stops thinking about work and disengages mentally from it between work and home domains. In this study, two types of recovery were defined (a) psychological detachment or the ability to disengage oneself mentally from work; and (b) relaxation


Enter: Smartphones at work
Smartphones are great for new forms of interaction and collaboration, like contributing to the social intranet or replying mails, and of course the numerous Whatsapp groups. Other positives often associated with smartphones are increased productivity, increased flexibility to work where you want, improved responsiveness, and the availability of real time information. However, checking your mail and responding may often seem like something 'small and quick' but may demand more time than you are aware of. You can only do one thing at the time, hence engaging in smartphone activities often implies not being their with your attention for your family or friends. There is an urge to respond when the smartphone indicates that there are new messages. This seems harmless but does demand attention. In addition, you can't control how many and how often you get messages.


Hypotheses: The increased productivity associated with staying connected to work in the evening hours is often achieved at the cost of higher stress levels which may lead to poor recovery, impaired performance  fatigue, and sleep complaints.

I often check my mails during evening hours too. It is actually shocking when you realize that it does create more stress. If people are not aware of the impact? All in all, there is a clear need for organizational policy regarding smartphone use. An organization may set boundaries for use of smartphones. I can imagine it is particularly important to monitor the intensive smartphone users and continuously discuss in teams how people use and experience the work-related smartphone conversations.

No more mobile and micro- learning?
The implication for online and blended learning is huge. One implication is that this is a downside of mobile learning, especially for high smartphone users and highly committed employees. The assumption behind mobile and micro-learning: we always have our smartphones hence it is easier to bring learning content to the smartphone. Of course this may be easier but the risk is that it invades privates lives and induces Work-Home-Interference. Although it may seem trivial to watch a video for 5 minutes, it does have an impact as this study shows on feelings of exhaustion and cynism.

It also stresses the importance of embedding online learning within workhours. I notice that in various organizations managers think online and blended learning can be done outside office hours (cheaper!). Even when employees are allowed to do it in office hours, it might not be seen as work by their colleagues. To avoid adding to stress online learning should become part of the job as face-to-face is.
Geplaatst door Joitske op 5:19 PM No comments:

I am not the first to note that social learning is a confusion concept. Every Friday there is an interesting #ldinsight Twitter chat. I joined one Friday when the topic was about social learning. I struggled going from my tweetchat back to twitter and hootsuite trying to keep up with replies :). Any Twitterchat is hard work but it was worst to make sense here because I noticed that we all talked with a different view on social learning. For instance, people talked about groupwork and having time to read quietly. I often see social learning is seen any learning activity which involves more than one person. That's one of the views but not mine.

I will write down the three main different views I hear when people talk about social learning. I see the social constructivist, the new social learner and the collaborative learners. 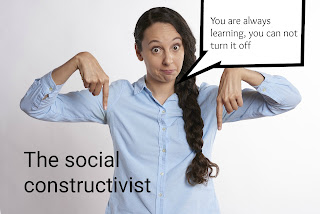 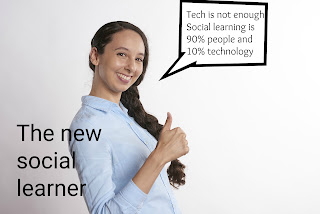 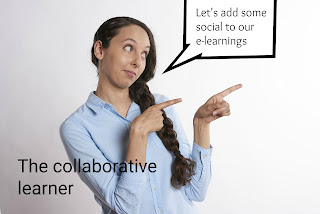