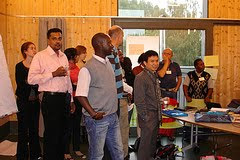 Over the past half year I facilitated a social media capacity building trajectory for a group of 14 development organisations (and 2 networks) in countries like Vietnam, Mali, Bolivia etc., together with Josien Kapma and Sibrenne Wagenaar. I've already blogged about our online start. It was great to work in a group of three facilitators, because you create an enormous flexibility. Someone gets sick and the others take over. It was wonderful to have the opportunity to be engaged with a group of development organisations over a longer period of time and see the process beyond an introduction session during a rainy afternoon.

Some examples of how organisations have started working with social media:

I'd also like to look back at the whole trajectory. What can we learn from it as facilitators of such a trajectory? What would I do differently if I had to do it again? We started with an intake, trying to figure out where social media could make a contribution to the organisation or to a network. This was followed by 3 weeks online training with the core participants from the organisations, who invited quite a lot of colleagues. Then we had a week face-to-face in the Netherlands, and a few months of distance coaching.

I've noticed my post about 10 online icebreakers is very popular. It gets often linked from online courses too. Therefore I thought it would be nice to add some more icebreakers. All those heavy reflections.. Let's get very practical. Here we go:

Do you have your favorite online icebreakers? Please share them in the comments!

My take-aways from cognitive surplus and some questions

I was very impressed by Here come's everybody by Clay Shirky and happy to read his second book Cognitive Surplus during the Christmas holidays. I definitely enjoyed reading it, because Shirky is very good in understanding social change as a result of technological changes and explaining it with brilliant examples. On the other hand, I missed some answers that I had unconsciously hoped to find. Let me use my blog to summarize my take-aways and try and formulate what questions I have that are unanswered...

First some highlights from the book (some already hightlighted in his first book):
Now let me think about my questions that are not answered by this book:
If you have the answer to these questions, please leave a comment :).
Geplaatst door Joitske op 1:35 PM No comments: