In our book Leren in tijden van tweets, apps en likes there is a clear call for people working with learning, change and innovation processes to dive into technology. Everyone sees that technology is increasingly taking an important place in our lives- even people who are not into technology. I did intakes with vocational teachers this week and I heard that they experienced daily competition with mobile phones. The attention span of students got shorter. If you compete with technology you might make technology work for you and help you? My advice is be curious about technology and get started. But how deep do you dive into different technologies and tools? and why? There are so many developments, think of blockchain, of which I do not know what it actually is. Sometimes it feels like you are in a tsunami of new developments and you let it flow by. For learning professional e-learning seems a clearer need than knowing about artificial intelligence and blockchain.

Artificial Intelligence- What the heck?

A great example of such a what-the-heck development is artificial intelligence (AI). Artificial intelligence is a collective name for software that manages creative thinking by the computer: the learning computer. I've heard about AI regularly, but a lot of it is at the level of 'HEEE, it's coming'. What can you really do? What's going to change? It doesn't click for me unless I get to work with it and start to apply it. A clear application of AI are chat bots. I have written about chatbots before. Those crazy puppets are everywhere if you have an eye for! Especially in Facebook messenger there are many chat bots to follow. I follow Poncho for the weather and a joke, and the allerhande chatbot with a daily recipe. For Slack users: the Slackbot helps you with all your questions about Slack. By the way, there are also chatbots which are not driven by AI, but those will be less smart in their conversations.

What is the influence of AI on the L&D profession?

During the L&D unconference in Rotterdam I hence threw the  above question to the group: I thought I would be alone in my group, but there were 8 people with interest in the topic. Additionally, those who did not attend seemed to regret it :). The nice thing was that there were concrete experiences in the group with AI applications. The first was the experience of a bank to have Watson analyze credit applications. You will have to teach Watson how to do this, but then you can save a lot of time. Another application shared: At a factory in Japan, a robot runs around (powered by AI) that connects with employees and coaches workers, for example, to take a break. It's not a big brother, but a very helpful robot. The time saved by the use of AI can be put into more creative tasks. A third example was an application that receives information from the internet to make predictions about the market.

The AI group acknowledged that you as L&D-er might be afraid of this type of development or may think it's got nothing to do with your business. The famous Calimero effect: What can we do as advisers / trainers / facilitators? This too big for us and something for the ICTs and decision makers and visionaries in the organization. It's not for us but for others. Perhaps AI will take over L & D's work by doing performance support tasks, for example. There is already one AI online teacher doing a great job. Or people are scared of the smart youth who understand it all. Look at the example of  Tanmay Bakshi a 12-year old programmer of IBM.

You will only see it when you get it

This famous quote by Cruijf applies to AI.  You can only imagine or dream up an application if you have seen enough examples and those examples inspired you. Because I opened my eyes (with a group of colleagues), we see different applications. For example, we will experiment with an online confession box for reflection. We could not have thought of this AI application if we had not followed the developments and many examples. In addition, many applications already use AI, think of your news feed on Facebook (does it?) Or your results in Google search. The danger here is that we are increasingly dealing with filter bubbles, you are getting more and more closed in the same line of thought.  Think of the Netflix bubbles. It might be another role for L&D? Ger Driesen calls this the bubble bursting role.

So what to do as learning and development professional?
Are you working with AI? I'd be happy to know about it in a reaction.
Geplaatst door Joitske op 4:28 PM No comments:

To conference or to unconference?

I was hesitating for a long time whether I would attend the L&D unconference, organized by Ger Driesen in collaboration with the L&D connect community. The unconference costs you a whole day of your time and follows the open space method. There was a theme: the future of L&D. With open space it is very unclear what you will get in return for your time investment. But ..... I have been going to the learning technologies conference in London for 3 years, and people (including me) always complain that the program is organized around the sage on stage. At such a conference, you do not get to talk to your fellow practitioners in the same way. What a dilemma to go or not to go. Eventually, I decided to go based the fact that it was in Rotterdam (which is really close to my home). By subway through the rain to the office of Anewspring. I soon met someone from the UK whom I knew of the Londen conference but we had not changed more than 20 words. Already a nice start to hear what he does. 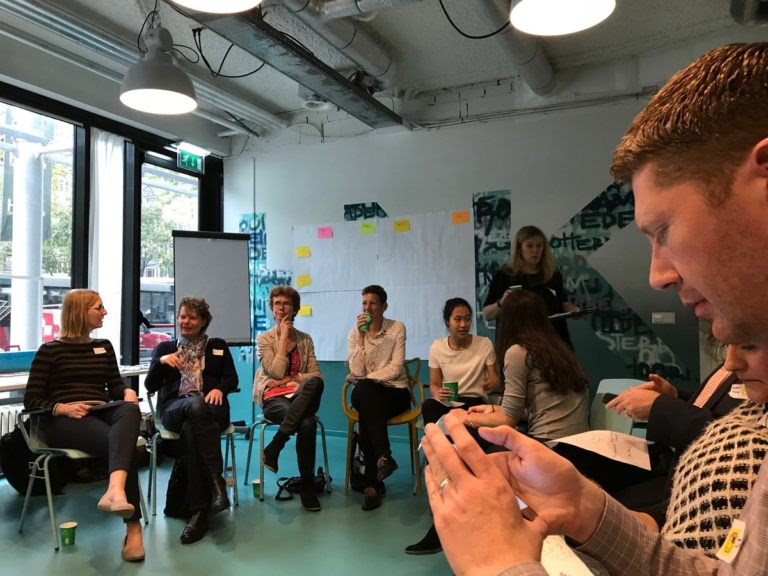 And yes, the rest of the day was delicious (google translates lekker with delicious :) as well. It felt like a long break during the entire day, where you can talk to interesting people endlessly about interesting subjects. It started with a brainstorm in small groups about the subjects you would like to discuss. I put up: the influence of artificial intelligence on L & D and new forms to stimulate self-directed learning. Already during this exchange I learned about a nice example (from Philips) where people were tested on a particular subject. On the basis of the answers they were directed to certain new sources or courses. A form to stimulate self-directed learning for people who do not know what they do not know. I was familiar with open space in organizations, but not with open space with a group of unknown people. In open space, the 'law of the two feet' means that you have to make sure that you have interesting conversations, so you can also change groups. The first time I walked away from a group, however, it felt like a rejection of the group, but I was glad I did. So I really had good conversations all day long by taking care of myself.

Changing relationships
Two conversations that had a lot of impact on my thinking were about relationships: depth in relationships, networks and how that changes over time over the internet. For example, there are elderly who have a strong network of 10-12 friends who support each other through thick and thin. The disadvantage is that this can be a really closed network. When you are a member of a closed network, you start to put everything which is said and done under a magnifying glass. Your world is small. I myself have a large network through my work abroad. Whoever I'm following online is by chance, one invites me to Facebook, the other on Instagram, the third I have on Whatsapp, I don't have a conscious strategy. You have to make choices with who you really want to make contact. Many of my online networks I follow from afar, but sometimes there is an invitation to go for lunch, meet again or work together. It has become much more fluid. The disadvantage of a fluid network may be that it becomes superficial. Do you care when someone in your larger network falls ill or looses a job? See also this documentary by Gino Bronkhorst. Gino is going to send all his facebook friends a message to inquire how they are really doing. Some answer: "Why do you want to know?"


The assumption is that you are a Facebook contact, which is not the same as a close friend really caring about you and showing interest. But there are also real friends on Facebook, and half friends, and former friends. My conclusion is that there are many shades of friendship, more than before. Friend networks have become much bigger. We don't get rid of people, they will still be there on some social network. Changing the categories of friendship is also faster. Even a best friend can move to the outside of your network.

We also talked about the future: imagine that all you do is supported by augmented reality as in video below. You can read emotion analysis during your date. You get the suggestion to smile or change topic. Who are you in this future world, what happens to your identity?

This reflection on changing relationships can also be transferred to describe changes in professional networking. These networks have also become larger than before the internet because we connect with more people online as simple contacts: I currently passed the 1000 line at Linkedin. Your network is more in motion than before, more fluid. And the day still has only 24 hours. So we need to learn to develop the art of networking when networks are fluid: what contacts do we want to invest in and which contacts remains at the edges?. What levels of colleagues do you distinguish? Is your network sufficiently diverse? Do you invest in the right contacts? I think almost nobody really does this consciously and well. Or?

The subject of Artificial Intelligence was also very interesting - I will write a separate blog about it. So I got home with lots of food for thought, renewed enthusiasm for open space and also a number of tool sites to look out like Degreed. The next time I hear someone complain at a conference I will ask why they do not go to an unconference ...