I just finished preparing a presentation about the art of fostering online networks in development; with a focus on producer organisations in the south (for a session with progresonetwork). While preparing the presentation I thought again about the fact that the basics of online networks are still social networks. Nothing else. So that is what I stress in my presentation. Since I really believe in the power of peer learning, I am existed by the possibilities of web2.0 to make south-south learning possible.

I've always believed in south-south learning since you can learn a lot of people who face similar difficulties and practice- just slightly different. Not that everybody in the south can learn from everybody else, but for instance cocoa producer organisations in Ghana can learn a lot from cocoa producers in Ivory Coast- similar difficulties but different context which pushes you to think creatively. I'm refering in my presentation to a survey undertaken by the world bank with 137 respondents about south-south learning. 94% think it is important or extremely important for improving the impact of international development and poverty reduction. Partnerships and alliances score best as mechanisms for south-south learning, followed by networks and associations, exchanges/secondments and study tours.

I use the examples of km4dev (see interview Lucy Lamoureux) and the IFRTD networks (see evaluation) and the lessons here are definitely that you have to mix face-to-face and online communication creatively and that it really help to have a dedicated network leadership, consistent over time.

Suddenly thought it is sometimes discouraging to read these success stories (that are even hard to replicate too!) and included the lessons of two attempts to stimulate online learning networks which were less successful: one by Anne Hardon, virtual knowledge communities: lessons learned in making them work, the other by three authors titled Forming a community of practice to strengthen the capacities of learning and knowledge sharing centres in Latin America and the Caribbean: a Dgroup case study. Great that these experiences are also shared and they may be even more helpful and insightful than the success stories.
Fostering Online Networks
View more presentations from Joitske Hulsebosch.
Geplaatst door Joitske op 3:09 PM 3 comments:

Why working wikily is so hard (at least for me)

Yesterday I blogged about the working wikily paper. It takes the stand that the tools are not so innovative, it's the networked way of working that's revolutionary.. and that's partly engendered by the tools.

My own blogpost made me think about the generational differences and the different mindsets about collaboration. I read and blogged the book Grown up digital. Though many people I meet recognise that different generations use the web differently, often they point to exception to the rule. And don't really know how to work with the differences. The depth of the difference may be underestimated. Trust in working online and trust in jumping into collaborative partnerships is an issue. It's almost a paradigm shift, but it sure is a deep shift.

An example from my own experience to show that working wikily is a profound change of mind. Though I try to learn many new tools (and not just technically, but also diving in socially) I have a mindset about collaboration that is not fully networked. It feels like it is partly changing- for instance I met a person in the train and may jump into a collaborative project with her because we have common interests. I'm organising a series of workshops with 3 colleagues by open admission. People send an email to one of us, the central coordinator for that workshop. Since each workshop had another coordinator, it caused difficulties when people changed workshop etc. My solution was to propose a central coordinator for all admission. Even though I know all the tools, wikis, google docs etc. it didn't occur to me. My colleague then proposed to co-coordinate, use all our email addresses and put all admissions in a google doc. It a networked way of working at small scale. But illustrative of a different way of working nevertheless.

I do wonder whether my daughters will have a mindset of working wikily (they sure learn it on the various social networks they are already part of) and whether that's a good thing. There are probably also downsides to it. What do you see as the downsides of working wikily with a networked mindset?

I found some inspiration in the paper 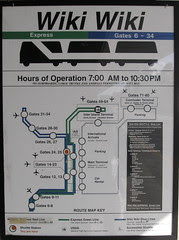 Working wikily 2.0. It is the title of the second version of a paper by the monitorinstitute. I like their intro: it's not about the wiki, it's about how wikis and other tools engender a new networked mindset. However, I'm also guilty of talking about tools because you still have to know the tools and how to work with them. (it goes hand in hand- the tools and the culture).

The paper specifically talks about how web2.0 is changing philanthropy. I'm thinking a lot about the question how working wikily is changing developing cooperation (we are starting an online discussion in Dutch here). Don't confuse philanthropy and development cooperation by the way! Philanthropy is the act of donating money, goods, services, time and/or effort to support a socially beneficial cause, with a defined objective and with no financial or material reward to the donor. Development cooperation is slightly more complex has to do with empowerment, social change, economic development and is also a political process.

Nevertheless there is a great example in the paper from philanthropy that demonstrates a new way of working and thinking that may inspire because grants are part and parcel of the development industry. The Case Foundation, launched the "Make It Your Own' Awards People could submit ideas for improving their communities, be reviewers and then vote for the best ideas to fund. They did build in a sort of control system. An open group selected the top 100 ideas, but advisors selected the 20 grant recipients according to the foundations goals and criteria.

If the development budget of the Dutch ministry would partly be allocated by a similar process, you would get a very different dynamic than the bureaucratic process it is currently. I liked the mixed approach, because I also believe in expertise and don't think you can make every process a democratic decision-making process. But the development budget is tax money, so it would give citizens some influence on how that money is spent.