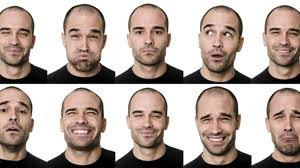 At the University I did communication studies as one of my subjects and I always liked non-verbal communication. As someone who is really enormously mirroring others non-verbal behaviours - it made me notice how often I do this. For instance when someone folds her arms and we have an intense conversation, I am also folding my arms. I can also listen with lots of attention - I'm the kind of person who at the end of the party didn't notice all the things going on because I was only paying attention to the people I was talking to.

Non-verbal communication can by via posture, eyecontact, gestures, but also movement or appearance - for instance having long hair as a man - what message does that convey?  In my communications book it is stated that 70% of all communication is non-verbal and that non-verbal signals are 5 times stronger than verbal.

So how does this work for online facilitators and trainers.. What should you do as a facilitator or trainer without this body language? You have no signals whether participants are falling asleep ... Does this mean that you can more easily focus on the content without being distracted or does it rather mean that you miss 70% of the communication and have to deal with 30%? I think this is one of the reason that there are not many trainers yet who have stepped up to facilitate online - they feel lost online - as facilitating in a room where the light is turned off.


Hanna Bervoets, a Dutch columnist had an interesting column last Saturday in the newspaper about nonverbal digital communication. She states that there is something like Dinoco - Digital Non-written communication which she explains as the behavior around sending digital messages that conveys an extra meaning. As an example- someone sends you accidentally a message that was intended for another person which means he (unknowingly) is thinking about you. Or another example - someone sends a tweet and removes it immediately. Meaning: he is nervous or unsure. I found this to be great examples and full of recognition as an online facilitator. If you have made many online hours, you can read a lot between the lines. So there is certainly a kind of meta-communication online, similar to non-verbal communication that you can learn to read as facilitator. I can see from the way of writing of emails from people I work with when they are very rushed / stressed or not. I also know often on a  Skype call when someone is multitasking. What I don't know is whether this requires a new kind of intuition?

Apart from reading between the lines, there are more ways to capture what is going on in a group and what participants are going through which is not communicated in the text. The 5 most important non-verbal channels of an online facilitator are: