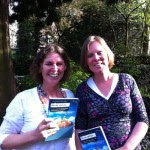 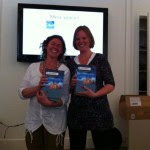 Last week we had the book presentation of En nu online (unfortunately for some written in Dutch). A bit late, in February we had to cancel it because of the operation of Sibrenne 's son, but it felt good to celebrate the accomplishment. We had a twitter backchannel (#ennuonline) where unexpectedly people who couldn't make it were very active. I hardly had the time to read it, so next time I promise myself to better prepare and plan time for the backchannel.

After an introduction ( prezi) of the three parts of the book: social media for professionals, organisations and facilitators, we had 4 different rooms. People were invited to walk from one room to the other:


The last room was run by me. We used the firehose metaphor to talk about information overload and ways to filter. Suppose you are thirsty, but you only have a firehose, how can you drink? Creative solutions included standing further away from the hose, making small holes in the pipeline so that you can drink from there. Or aim at a wall, so that you can catch the water indirectly. All ways to get the water in smaller portions. Some impressions of the conversations that followed after this starter:

- We all experience information overload, even the most experienced. The overload is not only in terms of information, but also in terms of the high number of tools. Continuously you have the feeling that there may be even better tools out there and that you are not using the best spaces. Important is also the mindset of the people who have grown up without social media. They easily have the feeling that they need to read everything, that they have to catch up with all information in their twitter stream for instance. Let go!! This mindset makes you feel very nervous. If you can let go, you experience less information overload.

- On twitter we asked: what is the most important social media for you? Twitter was mentioned as a favorite. Niel van Meeuwen: "I like to work with Twitter. It is fast and to the point and with many valuable interactions". Hans de Gruijter called twitter: "the miracle of serendipity, find what you have never looked for". Other tools mentioned were Dropbox, Ning, Linkedin, RSS Feeds, iphone, blog, facebook en Skype. Ger Driesen mentions the 'Big 4': facebook, twitter, linkedin and blog. Everyone on the backchannel agreed that face-to-face contact is crucial. Marcel Nooijen: "Face-to-face contact is essential and I'm surprised how social media contribute to face-to-face contact" Bart Bosch: "Twitter helps to connect people and to stay connected. Connection is strengthened by f2f contact and working together." Contact via sociale media and face-to-face contact are mutually reinforcing. Mariel noticed nevertheless that young people don't even know what twitter is. Is Twitter age-related?

- The groups were mixed in exposure to social media. Some wonder: "I'm not on Twitter or Yammer, so why should I start?" People with exposure report that they are really surprised by twitter as a medium for linking and learning. They gain new ideas. Angelica Senders who has recently joined Twitter is surprised by the speed and fun, compared to twitter LinkedIn is a very slow medium. An example was shared about Yammer too. Two professionals discovered they were working on the same issues, and started to collaborate. That can be the added value. For Mariel Rondeel twitter also supports reflection. At the end of the day, you send a tweet and have to think about what you gained, or what was of interest to you.

- A question: Suppose you want to tweet professionally, what should be the content of your tweets? The backchannel people had quite some good responses: Tweet about interesting moments at work, domain related interests, send links to interesting blogs, make sure your tweets sharpen your own ideas. But don't forget to react to other people. And try to find your own balance in sharing professional and more personal content. It is nice for followers to see the person behind the tweets. Saskia Tjepkema shares that she gets often a higher number of reactions on more personal tweets.. And you will most likely be influenced by the people you follow. A good test is the coffee break test: ask yourself whether you would share this with others during the coffee break.

- We also elaborated about the difference between reading books and tweets. Will our brains change from reading tweets? A person shared the example of a book of a frequently twittering person. The book reads like short pieces of text, without a good frame or story. This reminds me of the cartoon of the boy who says he has read only the first 140 characters of a book...Anybody remembers the cartoon?

- A good strategy to filter is to use 'experts', people or professionals you know who work in a certain field. Reading one blog will keep you up-to-date with major developments. You can also filter by sticking to a maximum to follow. A maximum of 10 or 100 blogs, a maximum of 100 people to follow on twitter. A tip is to make a list on Twitter with the people who are important to you, for instance only 20 of the 100 people you follow. By clicking on the list you see their contribution. This helps to stay focused on your network and your 'strong ties relationships'. As someone said "It is better to exchange meaningful with 10 people than superficially with 100". Others wondered why you follow 100 when you have a list of 20: "Why not unfollow the other 80?" The experienced twitters agreed that it is valuable to keep the 100, because of the unexpected links, insights and relationships.

- Tools for filtering. Great tools to filter are hootsuite (or tweetdeck or seesmic as an alternative, for a good explanation written in Dutch see this blogpost). You can set up your own dashboard as a tab in your browser. You can create columns with either lists or hashtags, or even facebook's news feed. This brings me to another great filtering practice: lists and hashtags. Via Twitter you can decide to follow and participate in conversations with a certain twitter hashtags (eg. #lrnchat for learning with social media). This has the potential to create a certain community of people actively sharing around that hashtag. Here you see the hashtag #nv02 from NVO2, an association for HRD professionals. After the bookpresentation I saw a short video of Jef Staes (also in Dutch, sorry!) and he remarked that people with a passion for something don't experience information overload.. I think that is an interesting angle to information overload too!. Passion gives focus and the greed to learn and digest information.
Geplaatst door Joitske op 10:33 AM No comments:

This quote is from Clay Shirky. A wonderful way of looking at the often mentioned problem of 'information overload'. If I say I'm reading and following 100 blogs people are really shocked and I quickly add that they don't have to. Clay Shirky is turning it around: the problem is not information overload, the problem is that people don't know how to filter. With the result that they don't make use of the possibility to access relevant information and develop connections. Watch Clay Shirky talking if you have time:

He explains that because of the low cost of publishing on the internet everyone can contribute. The web editors and publishers are no longer working as quality filters. This means that the filters sit on the other side, with the users, with us. So we have to filter out quality. This is empowering, but also demands quite some skills. 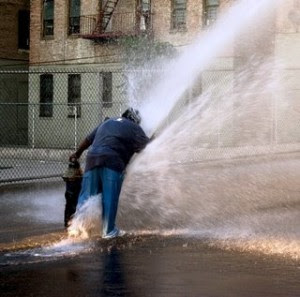 I've seen the firehose metaphor going round and I really like it. If you are thirsty: how are you going to drink from a firehose? So if we are floaded with information and conversations through social media how are we going to filter?

There are two basic helping frames:

Beth Kanter has a good blogpost and developed a diagram (shown here). 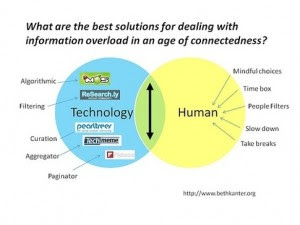 Three tips for the first filter: People and Network

There are probably many more handy tools. Share your tips in the comments if you have one!

Finally there is a blogpost with 6 lessons Steffan Antonas. De five lessons I consider to be very important are (read the sixth in his blogpost if you are curious):