Connecting and collecting (and being lazy)

On the Knowledge Management for Development a discussion took place about 'knowlege products' to which I posted a remark about the importance of striving for a balance between connecting and collecting. I forgot where I read about it, but since then it the concepts have stuck with me. Every now and then, I have the impression a community of practice is either leaning completely on the side of connecting, nor producing anything tangible, or is going to the extreme of collecting a lot of information without making sure people re-connect to the information collected. I'm convinced this balance is very important to get right.

I was too lazy to search for documents where I picked it up, but Stan Garfield read my question and was so kind to make it into the Knowledge Management Question of the Week. It's a good idea to read the full post with references, but in short he cites two sources. Thomas Stewart, writes:

"Connection, not collection: That's the essence of knowledge management. The
purpose of projects, therefore, is to get knowledge moving, not to freeze it; to
distribute it, not to shelve it."

David Snowden writes:
"Many years ago I formulated three rules or heuristics of Knowledge Management:

Unfortunately neither of them writes about the balance between connection and collection. I would like to know more about what makes people inclined to focus on one or the other. So maybe I have to search back in my files after all...

The other aspect I've been thinking about is whether connecting and collecting is the same as participation and reification in the theory about communities of practice. I reread some of the explanations from the book 'Beyond Communities of Practice'. I think these concepts are more subtlely described. Reification can also be in terms of a new concept, and is not necessarily something tangible. I guess the connecting and collecting may be concepts that 'speak' to a wide range of people more easily than participation and reification.

Prinsjesdag as example of local knowledge 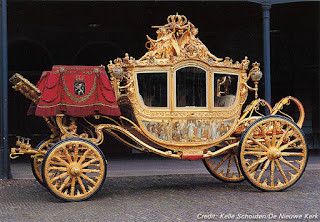 Today is 'prinsjesdag' in the Netherlands, the day that the queen reads the 'troonrede' with the governmental plans for year to come. There's a ceremony that a golden carriage takes her through part of the Hague to the place where she reads the plans.

I didn't know that all schools in the Hague have a holiday on that day! Something which is common knowledge for the habitants of the Hague. Not a big disaster, but you have to arrange child care or be at home etc. I learned about it through the schoolcalendar.

It made me think about the enormous importance of being able to access relevant explicit, local knowledge when professionals are more and more working on a variety of jobs and change jobs. When I lived in Den Bosch, it wasn't very important to know that schools in the Hague are closed. But when you move here, it's part of the necessary brain-luggage of a parent with school going children. So rather than knowing a lot, it's better to become good at accessing the most relevant information - and distinguishing between relevant and less relevant information.
Geplaatst door Joitske op 2:20 PM No comments:

Working room with a view 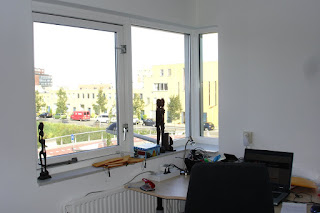 Since we moved to the Hague I have my own working room/office at home. I used to work from the kitchen table at home. The difference is huge: it's now very easy to make a conscious decision whether to work/not to work and that leads to reading the newspaper more frequently, not checking my mail during lunchtime while talking to the kids, etc.

As a point of reflection, it makes me think about the importance of living through something. When I was working from the kitchen table, I could reason that it was not an ideal situation, but I could not image the enormous difference. Secondly, it's also an example of learning through comparison. It's only after the situation changed, that I can really see the difference in retrospect. In my old situation, working from the kitchen table was such a habit, that I could no longer see how it influenced my time and working/checking mails etc was such a constant thing that it influenced my ability to quietly read the newspaper.
Geplaatst door Joitske op 5:27 PM No comments:

We produced a booklet with stories of how people and organisations in the development sector in the Netherlands have experimented with new e-tools to improve collaboration and communication. We have distributed hardcopies, but you can also download the booklet called 'I collaborate, e-collaborate, we collaborate from this page. Furthermore, you can find more stories on the blog with the same name.
Geplaatst door Joitske op 10:10 AM No comments:

Email ThisBlogThis!Share to TwitterShare to FacebookShare to Pinterest
Labels: e-collaboration 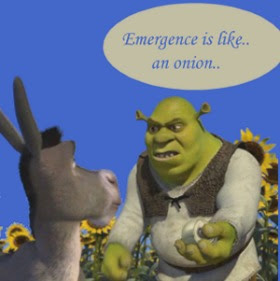 Check out the full blogpost for screenshots and more examples. It wasn't hard for the employees to get used to this way of working but he adds that AARF is not a typical workplace, being full of people who slap together mashups in their spare time. Nevertheless, I think web2.0 tools offer an opportunity to have more relevant content with less effort. Now how to introduce this is the big challenge....
Geplaatst door Joitske op 9:53 AM No comments: