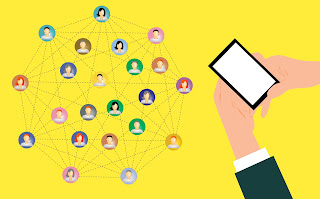 Are you getting started or are you fully engaged in introducing new social technology in your organization? It is not an easy task is it? It's tempting to blame the technophobes and people who are not tech-savy. The BUILD framework helps you look deeper into what makes it hard. By the way, when I talk about social technology, I think of:

You are probably convinced how important the new tech is, and how social & agile & effective the organization can be.. if only everyone would follow the online courses, share knowledge in online communities, work out loud .. and of course embrace the new technology. Getting everyone involved and enthousiast to use the new tech is quite difficult. Colleagues are often not waiting for something new in their busy lives.

I have seen how NOT to do it at an organization that had set up a room for live streaming. This way people outside the room could join in with interesting session and meetings. However, no one knew how it technically worked. It was also quite complex to operate the system with two cameras and a recorder. The support technician was difficult to reach. There was no talk or brainstorming done about the usefulness of live streams. The room was mainly booked because the chairs and tables were attractive :). I suspect that the technology in this organization no longer exists and that it has cost a lot of money.

This is a funny video with the current king of the Netherlands setting up a videocall with his mom. It is quite recognizable for anyone with older parents or grandparrents... She acts quite technophobe.

A technophobe is someone who has difficulty or is unable to deal with technology. It doesn't mean they don't like any social technology. They are often using, for example, social media because their friends are using those media.

If introducing the technology is difficult, it is easy to think that it is due to the digital skills of your colleagues in the organization. AARGH. "If only everyone was a little more tech savy..". The challenge, however, is not technophobia. It is much more complex.

BUILDS- Watch the influence of the technology on the users

But if you don't have to focus on the digital skills - what should you focus on? The BUILDS framework says: look closely at the influence of technology on work and the 'business'? What do you gain and lose as a user?

The book Shock of the New is written by Chad Udell and Gary Woodill and explains their BUILDS framework as a lens to look at digital transformation. The framework helps you take a good look at the intended and unintended consequences of a new technology. If you understand this, you can guide the introduction much better with smart actions. Often there are quite a few consequences. The introduction of Yammer in an organization shifted the communication hierarchy. Middle managers lost their control over the information flows. If you don't pay enough attention to these consequences and give the middle managers a role, you can get stuck.

Put yourself in the shoes of your users

The U from BUILDS- is the U of user experience. You have to really empathize with the users for the change to succeed. It seems like an open door, yet we sometimes overlook this step. You know your colleagues, right? Especially the technophobes :). After all, you've been working there for 2/5/10 years.

One pitfall is that we think we know the users, another pitfall is to start thinking about users very late in the process. A change process in which tech plays a key role often starts with selling the idea to management so that there is budget, then comes the selection and purchase of the technology. If the tech has been set up, the project already appears to have been successful and ends. But then it starts.

The plea of BUILDS is to answer the following questions much earlier in the process. This can be done through interviews, group discussions or workshops.

Make sure you do all this analysis at the beginning before purchasing the tech. Then you know which different groups of users there are. Make sure you involve these people in the vision development. But also when making choices regarding technology, testing and design.

Suppose you want to introduce a social intranet, you could invite a few people (both management and different types of employees) to test three different platforms. This way you can immediately observe how they use it and you can discuss the benefits for everyone, but also the obstacles.

An example: they may find logging in with different passwords very difficult. In that case you can work on single-sign on, so that employees can log in with one password. In this way you ensure that you do not see your colleagues as simple technophobes, but that you understand their hurdles and remove those. The aforementioned middle managers were extensively trained in 'servant leadership' so that their role changes and they can become enthusiastic about Yammer. The don't see it as a loss of control anymore but as an opportunity for new leadership styles.

Even after the launch of the tech, you continue to involve users. At Rijkswaterstaat, for example, managers and employees were offered a platform to share experiences via blogs and Yammer. The board then entered into discussions with them via Yammer in so-called YamJams. Keep an eye on the users and adjust if necessary so that the technology supports their work and does not make it more difficult.