I started my first social reporting experiences with Euforic, back in 2007 through a blog, trying to cover an event online through social media. With a team of reporters we covered the sessions and captured participants and presenters' stories through videos. It was an awful lot of work and I kept wondering whether it was worth the effort. Sure, there were people who would watch the videos afterwards, but it was also a lot of work. If you are interested to learn more about social reporting David Wilcox and Beverly Trayner made a great social reporting toolbox with lots of tips to get you started.

What makes me feel uneasy at times about social reporting processes is not knowing whether there is an interested audience that is going to read and engage with the event through social media, beyond the people who are present at the event. Then it becomes a process of reification without participation, or in more popular term, collecting without connecting. In term of knowledge processes, it becomes a flawed process, the creation stops. Personally, I enjoy seeing tweets or blogposts from events I haven't been too flying by, but I hardly read them with a lot of attention. It's like overhearing a conversation that you are not part of and hence don't pay attention to. Futhermore, there maybe a potential audience, but not conversant enough with social media to make sense of all the reporting. Or there is a group of practitioners that may be potentially interested but can't relate to the seemingly theoretical language. 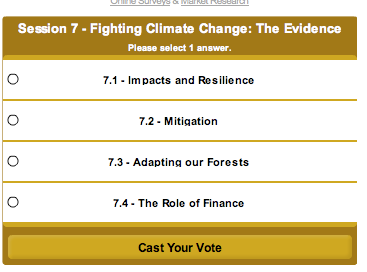 I would like to share an experiment we conducted recently to link a group of practitioners to a conference through social media. We had a group of 200 people online interested in a social network on forest landscape restoration, some researchers, but many of them practitioners working in projects on the ground. We started our process by telling them about the conference and sending out a series of polls, asking them which parallel sessions they wanted to be covered by their flying reporter (see the image for an example of a poll using Vizu). Quite a number of people (between 30 and 35) responded and even provided their reasoning for choosing a certain session. The reporter then simply followed the instructions of the majority, attended the sessions and covered them on a blog (click here for an example). The link to the blogsessions was also posted back to the online social network. Vice versa, there was also a face-to-face session in the conference discussing the issues that were raised online by the members of the social network.

I think this is a nice way of ensuring a process of participation and reification that makes sense. We managed to get practitioners interested in the conference. Unfortunately I don't have feedback yet to share with you but we are going to conduct an evaluation which includes this topic. It might be that the content of the conference is still too abstract or theoretical, but it might also be a nice way of bridging the gap between closed conferences and the outside world.
Geplaatst door Joitske op 3:29 PM No comments: