Often I get the question: do people know when you unfollow them? And I used to reassure them that you only get a notification from Twitter when people start following you, not when they unfollow you. But now there is a whole bunch of twitter tools; I started testing some Twitter unfollowers tracking tools:
Now I'm a little confused what I should do with this information. For en_nu_online I stop following them back. For my own account most of the time I don't really care. And this is now back-upped by real scientific research! (disclaimer: I only believe and quote scientific research when it's in line with my own convictions..)

I read the paper: Measuring user influence in twitter: the million follower fallacy by Cha, Haddadi, Benevenuto and Gummadi. They researched and compared three measures of influence on Twitter: indegree (followers), retweets (how often a message is resend by followers) and mentions (the number of times a person is mentioned by others on twitter). Traditionally a lot of research has gone into the influentials who can persuade others. A modern view how ever de-emphasizes the role of influentials in innovation, and pays more attention to the interpersonal relationships and the readiness to adopt innovations. A trend can be initiated by any one, and if the environment is right, it will spread.

The most followed users in the research spanned public figures and news sources (CNN, New York Times, Barack Obama) and celebrities like Britney Spears. The most retweeted were aggregation services like Mashable and Twittertips, businessmen like Guy Kawasaki and news sites again. The most often mentioned were the celebrities.

Interesting findings:
Similarly, Dan Zarrella talks about the science of social media and digs into similar topics. If you have the time, you may watch it, takes an hour.

The Science of Social Media from HubSpot on Vimeo.

Dan Zarrella dismantles the idea that ideas spread 'because they are good'. This is not the case, it depends on the ability to reproduce yourself. Most ideas get less than one retweet. Compared to animals, you have the elephants (live long) and the fruit flies (live short but high fecundity). The tweets may be compared to the fruit flies, you need to seed widely to have an impact.

Some highlights from Dan Zarrella:

Now assuming you are making use of twitter to change the world or get influential for other means (I still feel I'm there to connect and learn..) I guess what you take away from these scientific researches is the following:

Build a well-connected social network around you ready to embrace the changes you envision.Make sure you have unique and interesting information that resonates, information that fills a void. You may ask influential people to tweet or add please retweet. Multiple seeding may be necessary. Calls to action work. Don't tweet that you are gonna sleep :). Monitor your number of mentions and retweets, not the number of followers.

I had the pleasure to attend a presentation by Julie Ferguson. Julie is doing research for the university of Amsterdam (VU) 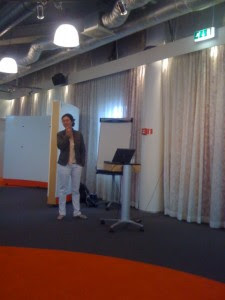 into (micro-)blogging as part of her PdD research about knowledge and power in the development sector. The research has not yet been published.

This research had the goal to investigate how knowledge related to a shared organising vision (in this case (ICT4D, about ICT for development). It analyzes the behaviour and perception of the bloggers. She interviewed 7 professional ICT4D bloggers (used interviews to identify those) and analysed their blogs. She has some remarkable conclusions.

Blogging has some so-called 'affordances':

Because of these affordances blogs may enhance participation in ICT4D policy and practice, creating an organising vision. It has the potential to close the gap between the discours at policy level and the discours at country level, by organisations and 'the poor'. This was what the bloggers believed in. In practice things were slightly different. The findings:

All bloggers basically blogged for themselves, not for marketing or other purposes. Blogging helped them in sense-making, development of ideas and reflection on their practice as 'reflective practitioners'. Blogging may hence be an important activity for professional development of knowledge workers and can help develop their professional identity.

Blogging outside the organisational boundaries

Bloggers contributed to a tunneling vision instead of organising vision

The idea of creating an organising vision through participation on blogs was not found through analysis of the blogs. The number of comments were relatively low (an average of 1,1 comment per blogpost); even though there were quite some readers. Most of the comments were positive, so the fear for negative comments that many organisations have was not confirmed by this research. (if I recall well, she said only 2% of comments were negative). On the contrary, many comments were appreciative like 'What a great post!'. By lack of real content interaction, the blogs were most of all a reflection of the individual professional bloggers, who we may see as 'knowledge-enterpreneur'. As a result, there was an overall fragmentation of ideas, instead of convergence. She could not discover an emerging organising vision. (it was not clear to me whether the bloggers were reading each other's blogs). Rather, ideas went into all kind of different directions.

However, despite the fragmentation of ideas, there was a new discours, outside the accepted visions of the organisation. You might say there were new lines of thinking, new directions explicited by these knowledge entrepreneurs. I asked Julie whether they influenced actual practice or policy, but that was outside the scope of her research. In some cases, she did get that impression though, that the blogs did influence policy and practice. This means that blogs can be a good tool for knowledge-entrepreneurs to stimulate innovative thinking within a sector. Though the research focused on the fragmentation, I do see this a something very positive.

Facilitators: we are needed!...

Simply by bloggers a new organising vision does not emerge spontaneous. This is the part where the obvious comes up: there is more needed than blogs to cultivate a collective vision, eg to cultivate a bloggers community, organise meetings, discussions of ideas presented in blogs. Think of what Global Voices ("the world is talking are you listening?") is doing to amplify the voices of bloggers in different countries. Also a teamblog might be an interesting alternative, like thes teamblog of NVO2. A teamblog might be more conducive to read each other's contributions than individual blogs.
Geplaatst door Joitske op 11:11 AM 3 comments: