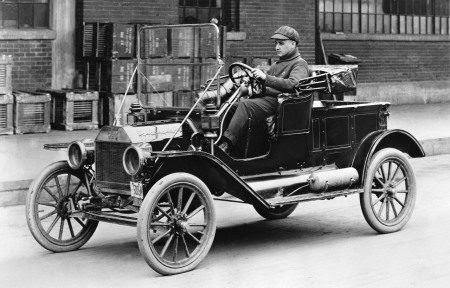 I often hear: "technology is just a tool and should be the starting point, let's start with the goal and the technology will follow". "The tech does not matter if we achieve our goal." In this blog post, I argue that technology is much more than a means. Social technology is a driving force behind social learning. And even within organizations and networks the choice of (social) technology is extremely important and can be a factor determining success or failure.

Technology is means or a goal?
A known example is Henry Ford who built the first car in 1896. Ford had a vision of "a car that moved forward without horses". If Ford would have asked what people wanted they had probably asked for a faster horse. And if Ford would have started with the goal? The goal is to make sure people get from A to B which would probably lead you to horses ...  In education the Open University in this article argues like I do that technology may well be a target. The examples show that technology is not 'only a means' is to carry out what we want to do. Technology is an important driver for change. As new technologies become available our behavior changes after a period of experimentation.

The pill is an example of a revolutionary technology that has caused changed behavior. Evert Chain shows the pill is an example of the right technology at the right place at the right time. When looking for 500 volunteers to test this contraceptive there were 5000 registrations. 10 years after the introduction of the pill in the Netherlands in 1962 it was already used by two thirds of women. Twenty years later, the use of the pill has become the norm A research in 1988 discovered a 16-year-old girl thought it was impossible to have sex without birth control pills, she did not know the pill prevents pregnancy. The major mindset change introduced by the pill is that sexuality was disconnected from pregnancies. Before the pill, there were already other contraceptives like diaphragms and condoms. However, the pill has become a huge success. One of the reasons is that taking the pill is independent of the sexual activity, and thus was respectable. And of course, the use lies in the hands of women. Finally, it is a more reliable method, so doctors also accepted it.

Like the pill social media is a technology at the right time in the right place. It fits into a trend of individualization and self-expression. Combined with the widespread use of smartphones and tablets it enables a continuous flow of communication with your networks, sports clubs and friends. It is an important technology-driven change in society. The influence of social media on society is huge because a new way of social learning is enabled by social media, in organization, between organizations and in spontaneous networks. Isaac Newton wrote: "If I can see far, it is because I am standing on the shoulders of giants." By publicly sharing work and ideas, considering the rate at which messages are spread through social media it is possible to stand on the shoulders of a lot of fellow professionals. Social media is a driving force that increasingly influences our daily thinking and actions. That is a huge innovation in learning driven by the technology of social media.

Technology to foster social learning in organizations
Following our personal communication on social media like Facebook, Twitter and Instagram it will be easier to stimulate social learning in organizations, if supported by the right technology. At Rijkswaterstaat in the Netherlands Yammer was successfully introduced for knowledge sharing between departments. The technology was in line with what people already know (Twitter and Facebook) and there was a vision for the new communication that they wanted to see: faster and more participatory. Thus, a policy was developed with input from everyone on Yammer. KLM Airfrance introduced iShare. The community manager is the one with a strong vision of what is possible when people commit to share more - innovation in the business. He was looking for a platform with a vision of social sharing that corresponded with his own vision. The examples of Ford, but also Rijkswaterstaat and KLM Airfrance show that you need that vision. Someone who imagines the car that moves without horses. Or the bicycle for the team that used to walk. At the same time, technology plays an important role to stimulate and facilitate certain behavior. Hence, technology is not only a means but also major driving force for change.
Geplaatst door Joitske op 4:19 PM 1 comment: