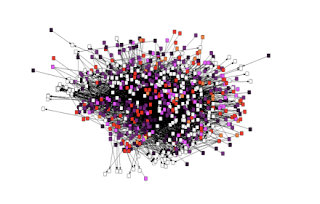 Together with Koen Faber, Josien Kapma and Niels Schuddeboom we have an informal dutch group who want to learn about social network analysis. Our learning curve is quite steep I would say! It helps me a lot to have likeminded people around me. For instance I signed up for the MOOC about social network analysis which started 4 weeks ago and which is interesting but also very scientific. I almost forgot about it during the first week but Koen telling me about the assignments (analyzing your own facebook network) stimulated me to dedicate more time and I even signed up for the signature track for the certificate.

We first got together somewhere before the summer and all blogged about our questions:

Since then, together we were engaged in 3 network analysis. Interesting was the diversity already in the 3 network analysis - the number of respondents ranged from 55 to almost 900, the purpose ranged from understanding and growing the network to evaluating the network. We used onasurveys to collect data and export and analyse it in Netdraw. I also used NodeXL to analyse a twitter hashtag and a twitter account. In the MOOC we are working a lot with Gephi to analyse data. Interestingly most tools are free or low cost (onasurveys is paid).

I learned a lot and it is very timely that next week Friday (the 8th of November) we'll share our experiences with a group of network professionals in Utrecht. If you happen to be in the Netherlands and are interested you are very welcome - more information on this page. The title is:

* Social network analysis can give a different view into a network, which can be revealing and help to make strategic decisions on how to strengthen a network. First a short story to illustrate how social network analysis can give a different view with a more scientific basis. Koen came to my place by public transport and I told him that he could take the train and then take the tram, alternatively take the train to the central station and then the so-called randstadrail. When he arrived, he said he took the bus! I never thought about the bus because I dislike buses and they always tend to keep me waiting for long. So I discard this as an option. However, he used the public transport planner and the planner found the bus. This is an analogy to show what social network analysis can do for network members or facilitators. Though network members always have their own observations and may understand the network quite well - it helps to have an images constructed from the information given by the members which may reveal things otherwise unseen. Though this is also a case of rubish in rubish out, if people do not respond honestly or do it in a hurry, there may be biases in the data too. In one case, a sponsor to the network was invited. Though interesting for network members, they saw a lot of their impressions confirmed. However, they felt very proud that the sponsor could finally SEE the network...

* The invested time is not too much, it may not always be justified but in many cases it may be. As a rule of thumb I am now calculating 5 days of work including designing the survey with the network coordinators, testing the survey, sending it out, analyzing data, preparing visuals and interpreting the visuals. I'm amazed by how much you can do with the free software programs, though the more you use it, the more you realize how much is possible and which you don't understand. I never used Ucinet for example and there are so many ways to calculate overall network statistics. That's a whole new world to me. Besides it is very easy to import a twitter network into NodeXL or a Facebook network into Gephi. This is far easier than I imagined. So in half a day you could already analyze some social media data.

* Working with the network members needs to be the core of the work. As we already thought, the interpretation and discussion with a representation of network members is very important. In all 3 cases we had a debriefing ranging from 1,5 to 3 hours, in which the images guide a discussion. I think it would be even better to have 2 sessions with the team. One session in which you show the images and what they represent - then sending out a short summary, followed by another session to talk about interventions. On the other hand, I realized that the work of the person designing and interpreting the survey is very important. He or she has an important part to play in choosing the right questions and filtering the images to show and interpret.

* It is an art rather than a science. It is very important what kind of questions you ask and wording matters. It also matters a lot what you analyze and how you represent it. You have to develop a sense for the right questions and the images that will help the understanding.
Geplaatst door Joitske op 4:52 PM 1 comment: