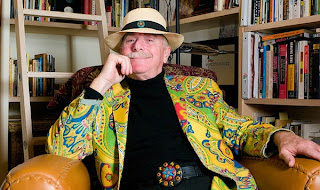 Past Friday we organised the presentation of a book called 'Because it works'. It is a collaborative effort by the LOSmakers, a group of 15 professionals passionate about the new potential offered by social media to stimulate social learning. The book is full of practice cases and can be downloaded here. It is in Dutch but we are thinking about the English translation and already working on translating two cases. We offered it online as a free download and it has already been downloaded more than 15.000 times!

It was not a traditional bookpresentation, but rather a workshop in which people worked on their own cases of situation in which they want to stimuate social learning through social media. In small groups they chose a case, formulated important questions and with those questions went shopping on the market with experiences. They could also call in the help of Twittercoaches. One group chose as a topic: what can you do as a learning professional with few means to support learning in small groups? In the video she talks about their insights (in Dutch).

Let me help the non-Dutchies: She talks about 4 important insights they gained from the market and the twittercoaches:
You can find the storify of the event here. With regards to our twitter backchannel we had a nice mix of planned and spontaneous interaction. We had asked 3 people who could not participate whether they would like to be twitter coaches so they were available (in the Netherlands, Belgium and Portugal respectively!) and reacted to questions from the groups. One of the participants working in higher education tweeted about the idea of starting a facebook group for the first year student and one of the students following her tweeted back and it was a cool idea but would be best to have students as administrators.
Geplaatst door Joitske op 4:09 PM No comments: