Culture and technology: The Suri in Ethiopia and guns 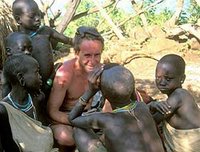 Zapping on television I landed in the middle of a documentary of the BBC: Tribe I had already seen once before. Bruce Parry lives for about a month with isolated tribes and participates in their activities and rituals in a very playful and respectful way. This documentary was about the Suri in Southern Ethiopia (a part of Ethiopia I have never visited). They practise ritualised violence -the men’s have their donga or stick-fighting battles to train themselves in dealing with enemies, and it works as an outlet for aggression. Since I had seen it before I mostly remembered the part where there are gunshots. And that part came. During the ritual, which is a huge party for all involved, with lots of drinking, suddenly there are gunshots. Bruce get scared and runs. Some of the Suri later complain that the ritual has changed since the introduction of guns into this society. Before that conflicts during the ritual were settled easily, but with the introduction of guns, men who are drunk, start to misuse them and levels of violence during the ritual are escalating. More on Bruce's motivation here. In one of his responses to various frequently asked questions he says:

"Change, if not managed, can bring about a complete social upheaval, loss of cultural identity, famine, disease and manipulation by corporations and national authorities including theft of natural resources and traditional environmental knowledge."

"It is human nature to want an easier life and modernization seems to bring this. I like many of the new developments and changes in my own world. I like instant electricity, central heating, mobile phones, good movies…if that’s what they want too then its patronising to deny them that desire? The problem comes when change isn’t managed and the community is not warned of the various pitfalls such as commercial predation (like selling their land), or loss of cultural identity, pride, language, traditional environmental knowledge etc."

"Cultural dominance or intolerance is a very destructive premise in a rapidly shrinking world (e.g US in Iraq). There are plenty of practices that we take for granted as right and acceptable which other cultures find disgusting. Saving the contents of one’s nose in one’s pocket; using paper rather than water to go the loo; putting old people in homes to die alone; owning land which is meant for all; taking trees with little regard for the future. Are we so superior? It can only be a good thing to question one’s own culture before looking down on another."
Geplaatst door Joitske op 11:48 AM