On carnaval and warts 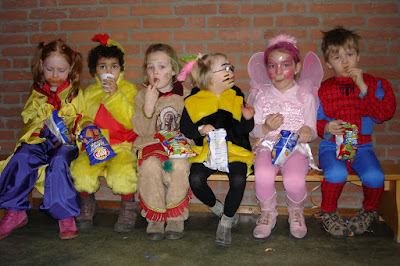 Innovation often starts with timely feedback on your performance. Last Friday, I helped with the carnaval celebrations at school, where I took this great picture of my daughter and some classmates (some of my blog ideas actually start with a nice photo, but I only start writing when I have a click with a good topic). Like last year and the year before, it was well organised. Today I received an email asking whether we had liked the event and had any suggestions. In replying, I was able to congratulate them and give some small ideas for improvement, that I hadn't told them on Friday. I think this is a brilliant way of asking for feedback, just a day after an event. And not by a long question list, but just a simple and open mail.

Some weeks ago, my other daughter had a wart on her foot and I took her to the general practitioner, a young doctor. I will spare you the picture of the wart... She treated the wart, three times, and said the wart should drop off after some time, but nothing happened. The fourth time there was an older doctor. He did the same thing and after 3 days the wart dropped off. But I didn't have the opportunity to give this feedback to the young doctor, as it would seem like undermining her expertise. Still, I have the idea she has to learn how hard to really apply the ice for the wart to disappear.

It seems if we all would become smarter at using all the media at our disposal for getting feedback, and improving our feedback systems we could learn faster (maybe the doctor is reading my blog :)...
Geplaatst door Joitske op 9:08 PM