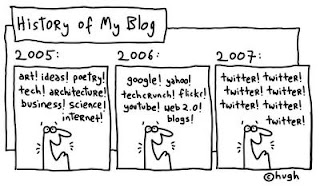 I'm preparing an experiment with Twitter for 10 people, most unfamiliar with Twitter. Twitter is: A global community of friends and strangers answering one simple question: What are you doing? Basically you update your information continuously with short messages (max. 140 characters) and you can follow/be followed by others who read those messages.

For some, this seems an 'old tool' but for most of the people I work with it is unknown. On the one hand I encounter people who think that putting your information on internet is quite dangerous and feel that we should reduce the number of emails, on the other hand, there those who don't care whether you reply on facebook, twitter or their blog. How to find the middle ground when a group is a mix of those people?

A nice Twitter guide for beginners is written by Robin Good.

Nancy White is compiling stories how Twitter can foster collaboration. Some examples (but there are lots of other examples- check it out):

For the real fans: there is the twitterfan wiki.
Geplaatst door Joitske op 4:30 PM

Keep us posted on your experiment!