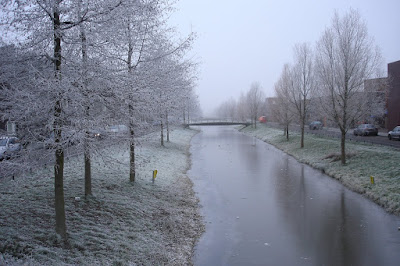 We live in a relatively new neighbourhood (8 years old). A few weeks ago the school facilitated a traffic situation investigation and one of the identified problems was that the bridges in our area are high, hence make it hard for people (especially children) footing to school to safely cross the road and see all traffic coming over the bridge.

Today the area looks beautiful because all water is frozen. This is how I learned from neighbours that the design was optimised for ice-skating. The bridges are high enough so that you can skate under them. Unfortunately so far, in the past seven years, people have not skated since the winters are not that cold anymore!

Another example of design flaws. I still believe in interactive design, whether it is for irrigation systems, bridges or toolsets. But I am always surprised that the designers makes certain decisions without really discussing them with the future users of the system they are designing. And often they don't even know they are making those assumptions!
Geplaatst door Joitske op 9:48 AM