Technology: inclusion/exclusion via choice of technology 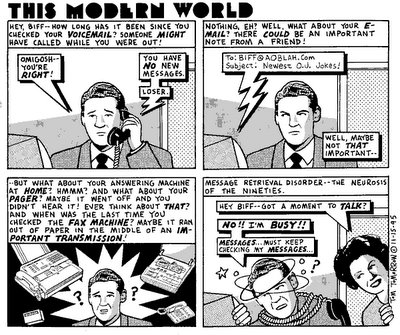 We had a friend over for dinner and discussed changing use of technologies: we had made the appointment by exchanging 2-3 mails whereas 1 year ago, we would use a phone call to make appointments. So she said that's it is important to keep up with changing technologies not to get sidelined (I was showing her my blog and RSS and she was very happy with the discovery of RSS services). Her -younger- brother was surprised that she was sending sms-messages (she had come back from Indonesia where everyone was sending sms' all the time).

Then she wanted to show something on her mobile phone. And found a an SMS from a friend inviting her for his birthday- which had passed already- . She had missed his call because she did not hear her phone in her bag. She just posted a birthday card, not knowing about the invitation. So I told her that next year he would probably stop inviting her at all, since she did not even reply, a slow entry into a final state of social isolation. She agreed that I could blog this :).

Lesson of the week: when chosing a certain type of technology for communication be aware of the assumptions you make about the use of the medium (frequency of use/access, comfort levels, personal preference: having a phone doesn't mean you check your voicemail daily) or rather try to be aware as I also end up with surprises all the time. For instance I assumed that people in the Netherlands are comfortable with e-mail; for a CoP using a mailing list I learned that at the one end a person was subscribed to 100 mailing lists, on the other hand a person felt overwhelmed by the number of messages which wasn't more than 5 per week.
Geplaatst door Joitske op 9:06 PM

In my case, I wish everyone is using email instead of SMS. I dislike SMS because I have bad eye-sight. Without my glasses, most time I have problem to read the messages. And then the TYPING! Big fingers!

I have this person I am suppose to contact BUT does not use emails! ONLY SMS! So you can imagine how easy/willing I am to contact them?

Would it not be wonderful if we all go back to pen and paper again?

I think there are some generational or age divides with this technology, too.

I was thinking about this issue. In my opinion it it not just only generation or age divides, there are language, wealth, literacy (you need to know WORDS before you can SMS, for example), so on and so forth.

So, I just wonder how much technology has solve 'digital divide'? OR has technologies created more 'divides'?