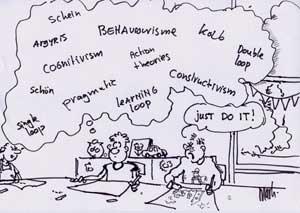 (cartoon by Mark de Koning- who was the cartoonist present during the workshop on organisational learning and made cartoons based upon what he overheard!)

This is our week of fame as I figured in the article we leren allang alleen niet bewust by Vice Versa, the volkskrantbanen and my daughter was interviewed for stadsblad about her views on the playground. (the last is not available online). The article talks about organisational learning for development organisation- is it a hype or not. Unfortunately, no mention of the role of communities of practice. But probably I should have brought that up as functional CoPs can play an important role in fostering learning processes and innovation within organisations.

Quite some media experience suddenly, and I think the volkskrant experience worked best (a face-to-face interview- represented by a column in the article). For Vice Versa, I was interviewed for almost an hour by phone (in the train, but that was my own fault) and only three quotes are taken from the interview for the article, which quotes various others (now can't believe why I actually said those silly things, but I remember I did, so that's also my own fault). I felt very dependent on the journalist's mercy and very powerless even though I got to see the text before it was published. She decided not to link to my blog for instance, even though I suggested this. But it makes me even more aware of the power of blogging (web2.0 thinking) versus old media (web1.0 thinking). Why didn't they tape the whole interview and make that available online? Why not provide as many links as people may find interesting?

By the way in the same Vice Versa there is another article which sounds interesting: cultuur en ontwikkeling een missie in het eigene? Another thing I don't understand about Vice Versa is why they publish in Dutch while talking about development cooperation. Several of my own colleagues will not be able to read it.
Geplaatst door Joitske op 9:48 PM