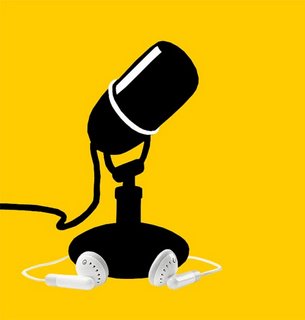 For people who'd like to record and upload an audio file to their blog: here's how I did the podcast, only using free tools! It took me an incredible amount of time though, about 3 hours (4 if you'd include the interview), so I prefer recording and posting videos. On the other hand, next time it may be much faster. It will definitely be much faster if you don't do any editing and post the entire interview, as reducing the interview from 33 to 9 minutes took a lot of time.

1. For the interview we used skype to communicate and audacity for recording the call. We did a short test (both recording the call) and found out that you hear your own voice clear enough, but you don't hear the other party's voice clearly. Instead of figuring out how to solve this, I decided to use Bill's recording instead (thought I don't need my own voice). I had sent my 4 questions beforehand by email, but Bill had not seen them yet. The whole interview was 33 minutes. In audacity you have the option to export it as an mp3 file to reduce the size.

2. As the file was too large to send by mail, Bill used you send it to give me access to the mp3 file.

3. For editing the interview I used wavepad. I decided to listen and and mark each episode with beginning and end time, before deciding which parts to keep and which parts to delete. I ended up just deleting the parts I did not want to include, and did not reverse any order. I did not bother too much on nice transitions, that would make it really time consuming.

4. For uploading the interview to the internet, and making it accessible from my blog, I used gcast. I had not figured this out beforehand, and tried googling on 'posting audiofiles on your blog' etc but couldn't figure it out. But! Fortunately I had my delicious tag on podcasting and hence found Brit Bravo's post on how to make a podcast. She explained that she chose gcast because you can easily embed your podcast in your blog or website. (thanks Brit and long live blogging and delicious!). This was really easy and straightforward to do.
Geplaatst door Joitske op 11:51 AM