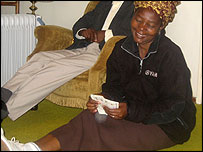 (picture from BBC article)
The BBC writes about virtual weddings in Zimbabwe.

"Zimbabwe's traditional weddings, usually joyous occasions with singing, dancing and plenty of food, are now increasingly being held in the absence of those whose presence might be considered vital - the bride and groom. "

Couples living abroad find it hard to be there for the traditional wedding ceremony, so instead send money home for the ceremony to take place without them. This means some parts of the tradition can not take place, for instance, "A day or two after lobola has been paid the bride is supposed to be covered in a white sheet and taken by her aunts to join her husband and in-laws at their homestead, where she carries out household duties."

Playwright and cultural analyst Stephen Chifunyise says: "It does satisfy minimum requirements, because in the actual process of paying lobola, the couple does not play a major role," he says, explaining that everybody appreciates the reason they are out of the country. And it also shows that we've been able to marry technology and tradition adequately."

Another example of how cultural habits do shift over time. It was not clear to me, how exactly technology was used to support this wedding, apart from the couple phoning afterwards to hear how it has been.
Geplaatst door Joitske op 9:58 AM