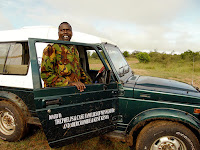 Via the Dutch blog Knowledgecafe I clicked through to the story on Wired about life, death and twitter on the African Savanah. I dislike the fact that they talk about the African Savanah, like Africa is one country, and the story is really about Kenya and Congo. It really happens a lot that people tell me they have travelled to Germany, Cambodja and Africa!! Do one country in Africa and you've seen them all.
Anyhow, this is the success story: William Deed, is an experienced and famous blogger from the UK who was recruited by Richard Leakey, the famous conversationist. He helped wildlife rangers of the Virunga National Park in eastern Democratic Republic of Congo to set up weblogs, see the Gorilla Protection blog. "The rangers' salaries are paid from park fees, but tourism has dropped 90 percent. To keep the conservancy running, the park's online outreach needs to raise $50,000 a month until the tourists return -- a job that's fallen into Deed's lap."
The park's online efforts are succesful! Kimojino is a Mara ranger who blogs here. He asked for donations on his blog: "100% of your donation, minus only a small bank fee, will go directly to the work of the Mara Conservancy.". The blog raised $40,000 from donations in March 2008, his facebook page drew about $2,000. Safari companies bought advertising on the blog too.
It's interesting example. If you peel down the elements of success, it is most likely the fact that people can read, see pictures and engage with the park stories directly. Donating directly may be nicer than donating through agencies like the World Wildlife Fund. Then they have used the expertise of an experienced blogger to set up the system and probably train and coach the rangers. And they have a well-targeted topic!
Geplaatst door Joitske op 1:01 PM