I'm in the field 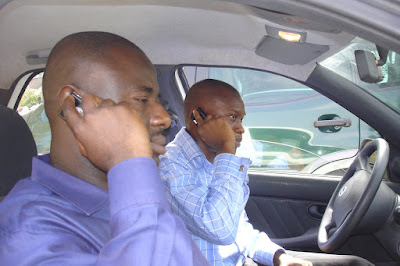 Last week I met a researcher who asked me about my work. He asked whether I was 'going to the field'. I replied no, but when I dropped the word Accra, while talking about my work the conversation became very confusing. It appeared the researchers considered all work in a research country as 'field'. As an irrigation engineer, I'm raised in the conviction that anything to do with office and not sufficiently muddy, is not 'field'. Hence my firm No-reply. A good example of the fact that crosscultural communication is not only between nationalities, but also between professions.

So in his language I'm now in the field (Accra). See in the picture that being in the field for me now means driving in cars (sometimes while colleagues are all talking to their own mobile phone)... Though I can understand this definition, deep down, I really disagree with this definition and miss the real fieldwork of walking in the rice fields and talking to farmers.
Geplaatst door Joitske op 8:17 PM

Hi Cindy, I think it shows that every profession has its own definitions and also may attach different value to work in the field/not working in the field