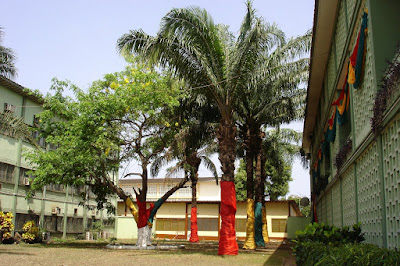 In Ghana (all flags around to celebrate the 50 years independence see picture) I finally have the time to catch up with my bloglines, missed CPsquare teleconferences and blogposts in my head. Though I couldn’t download the audio file (it would take 5 hours...), I read the chatnotes of a teleconference call on the community formed around the NPtech social bookmarking experience with Beth Kanter. I was interested in it because of our work with the NPk4dev tag (see feed in the sidebar of this blog). Something that has puzzled me is whether a tag can really form a community. Tagging seems so superficial in terms of knowledge creation, it is more a flow of information. Can we say there is learning going on or is it just sharing information more rapidly? If people start tagging can we all that a community of practice? So: off to the chatnotes.

In the chatnotes of the teleconference the metaphor of the firehose was mentioned. At first I didn’t understand it, but at the second referal I understood it this way: when you are thirsty, a firehose can not help you to drink. Internet is now considered as a firehose of information by many. There was also mention of fear of putting your keyboard into your mouth - I didn't get around to understanding that unfortunately….

A question discussed was whether the community formed around the tag or whether the community formed around three individuals. There is a transition between the "people are the hub" versus "the tag is the hub”. The difference between the librarian approach and tagging was described as: every book on the right shelf vs every book is on every shelf. Actually a great way of explaining the different rationale between tagging and categorizing. (which reminded me of a discussion I had about resistance by librarians to some of new ICT developments). Then there was a remark that there are hunters & taggers, not everyone has the same role.

All this inspires me to reflect on the npk4dev tag process, a feed with materials tagged about knowledge management in a development context (aggregated on superglu). First of all, this is the initiative of one person (Peter Ballantine) who invited three others to start an experiment. I knew about the nptech case through a session in CPsquare (with Beth). And through her, I joined the NP (non-profit) tagvocates and we decided to rename our tag into npk4dev. The case was described on the e-collaboration group blog. We announced the tag once through the km4dev discussion list. We set up a blog which is still empty, because no one really had the energy to pull that process. The next step will be taken during a face-to-ace meeting of the latter group.
Now what's the role of tagging in community formation in this case? I think it strengthening the collaboration between the initial 4 persons and in this case, they take the tagging experiment hopping along various groups (in which they are already active), learning here and there. In a way, the tagging experiment has brought a new member into the e-collaboration CoP, a person who might be an fanatic tagger (?). I don't think we can talk about a ‘tagging community’ because it is rather the other way around that the experiment could leverage various existing communities of practice. People who would not know could from the outside think that this is a tagging community though.
This case shows that use of a certain new tool (like tagging) can apparently bring about new connections and new members into a community of practice, or might encourage others to become active, because a different skill/interest may be aroused. Some tools seem to encourage the formalization of a certain level of membership (like signing up for the Dgroup). The constellation of CoPs as represented by the formal Nten, Netsquared, CPsquare, km4dev and e-collaboration communities is probably also worth a study in itself!
Geplaatst door Joitske op 1:07 AM

Thanks for your thoughts here. Not sure if you saw this presentation or article - but the chat notes from that call trickered these:
http://www.flickr.com/photos/cambodia4kidsorg/sets/72157594548229100/

Take a look at this slide
http://www.slideshare.net/rashmi/design-for-social-sharing-workshop/50
and then the whole presentation ..
some new thinkign from a info design perspective.

Hai!
This is Rock

This is very good site. And
Thanks for your thoughts here some new thinkign from a info design perspective