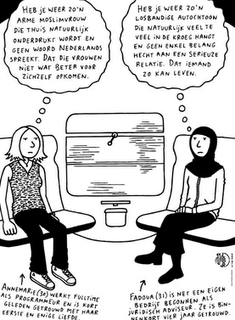 handvest van de aarde
At the site of project implicit you can do tests about your prejudices conderining fat people, gender stereotypes or ethnicity ( in Dutch, the english version is here). I did the alcohol test and have a slight preference for alcohol over non-alcoholic drinks. I also did the Martha Stewart versus Oprah Winfrey test and have a slight preference for Martha too. (I do dislike Oprah Winfrey even explicitly).

It is tested by your reactions to combining alcoholic drinks (or Oprah Winfrey) with either positive or negative terms. When you associate terms, your reaction is faster. I was quite convinced that it was easier to combine alcohol with negative terms, but apparently I was faster with positive terms. I'm just reading though that heavy drinkers have negative associations (phew!)

From the site: 'A stereotype is a belief that members of a group generally possess some characteristic (for example, the belief that women are typically nurturing). An implicit stereotype is a stereotype that is powerful enough to operate without conscious control. Example: Try answering this question: Is John Walters the name of a famous person? If you suspect yes, and especially if you were more likely to think yes than if the question had been about Jane Walters, you might be indirectly expressing a stereotype that associates the category of male (more than that of female) with fame-deserving achievement. And this may be the case even if there is famous female with a similar sounding last name (e.g., Barbara Walters). This type of judgment was used in one of the first experimental studies of implicit stereotypes (Banaji and Greenwald, 1995; Banaji, Hardin, & Rothman, 1994).
Geplaatst door Joitske op 12:48 PM

Hmm, the trouble is I have never heard of Martha Stewart but I do know of a John Walters.

I know an Eddy Walters, would that count too??