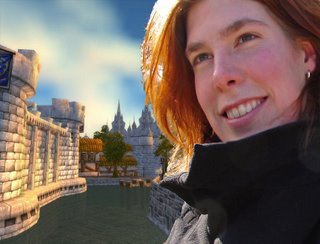 I had a very rich conversation in Utrecht with Marinka Copier who works at the University there as a game-researcher. She has a keen interest in communities of practice too. Her interest in games has grown from entertainment role-playing (and the effect on learning). Her Phd research follows an ethnographic approach so she is doing lots of gaming and observes how the gaming communities function and develop. She has also done research for the University of Maastrict on games that olders gamers play. Marinka shared some interesting observations, like the observation that there is a gap in the age group of 40-50, but that there exists a group of people above the age of 60 who is really involved in gaming. And that this somehow a taboo; illustrated by the story that she went with an elder gamer to a shop to buy a game and the salesperson said: "I assume this is for your grandchild?" Another observation was that a lot of the younger gamers don't use e-mail but rely fully on MSN, so she had to change her habits too. (interestingly I assumed there is somehow an online generation 'younger than me= younger than 40', but apparently you may be able to distinguish important sub-groups with different habits, like the 30s and 20s and younger.)

One of the topics we discussed in-depth is what is it that online interaction can add to learning repertoires?. We both agreed that learning processes are central, and online tools should help to support learning processes rather than using tools because it is 'cheap' or 'time saving' (as for newcomers it is often not time-saving!). I think online interactions have the potential to stimulate creativity, to push people outside their confort zones; to add a new layer of learning possibilities. It pushes you out of your routines, which in itself is an experiences. But ofcourse the type of online experience matters. I was quite intrigued by the gaming stories and how people learn intercultural skills amongst others. Some gamers do not realize that they learn, but say that they learned English, made friends in other countries and may even visit them in those countries too. In some games, it is a chance to experiment with different behaviours, it can hence stimulate phantasy and imagination and open up new ways of acting for people. But not all games have that automatically. She had the impression for instance that second life stimulates more a replication of real face-to-face life.

Another central question was also: how do people learn and get excited about new online technologies (eg. how are you introduced into gaming?); often this works via a strong interest, or via a peer group or network you belong to. You might learn how to use skype because your aunt has migrated to New Zealand.... And how does this translate in use of technologies within organisations? What determines how organisations use technologies and how does this support (or frustrate) their work processes? It does not seem there is abundant literature and research on this topic. My hypothesis would be that it depends a lot on the management team's capacities to see and stimulate the potential use of new technologies. We came back to one of the things we also discussed last week, that use of technologies is not something which is easily discussed at the workplace, so that colleague learn across generations. Developments like the energy put into blogs, wikis, social networking tools, videos, show that people do like to express themselves and their ideas via the web. A lot of energy which has in many cases no directly relation to the work people do in organisations.

Again, we agreed though, that it is not about using the latest tools, but about being able to communicate and work effectively. How can organisations leverage the energy displayed by individual bloggers or vodcasters? I'm so curious how the generational gap work out in the workplace in terms of use of technology, so any articles or pointers to resources welcome!
Geplaatst door Joitske op 5:47 PM

I think itis time for you to come into second life .. if you need help, I've been there months ..

mmm.. not sure. I'm afraid it will take up so much time!!