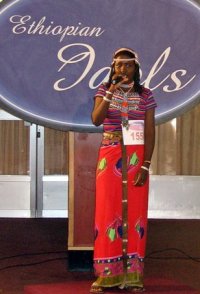 Ethiopian Idols is causing a sensation on television. And I can imagine if I remember the usual TV-programs!! One world is reporting that jury member Feleke Hailu is as harsh as the Dutch jury. His sentence: 'Alta Fakedem' (translation: you did not make it) has apparently become a popular phrase in Ethiopia. People were reportedly shocked in the beginning as it is unusual in Ethiopia to criticize in public, but the program has the highest ratings. Critics say it is a cultural invasion, but the organisers think it gives room for local cultures, as candidates are allowed to sing in any of the 80 languages of Ethiopia.

If only the editions were webcasted... so that we could see the iskista...(moving shoulders dance).
Geplaatst door Joitske op 9:06 PM

IT'S very sad to read some of the articles from western news paper. no matter how bad it is as they writing, the most important thing is all Ethiopians who are watching the program enjoying it. what the western paper need to understand is that, the show is prepared to intertain Ethiopians not westerns news paper