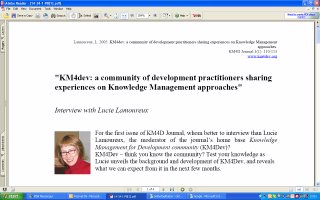 Talking to people from MDF, a training and consultancy firm, we had to conclude that there are few practical examples of communities of practice in a development context, so I'll try and search harder (haven't even started the whole km4dev journal for instance). I'm not sure if there are no examples, but there may not be many well-described cases of how communities of practice were intentionally nurtured and leveraged for enhanced knowledge sharing and innovation for development.

One example of a community of practice is the KM4dev community and I had the honour to to talk to Lucy Lamoureux, the coordinator, somewhere last year, about the same time of the publishment of an official interview with her in the km4dev journal She describes the Km4dev community as a group of development practitioners working in knowledge management and knowledge sharing who ask for advice and receive quick responses from peers. The community grew quite organically after two workshops organised in the year 2000. Now, after 5 years, it has about 385 members, with about 35% of members based in the south. There is a core group of about 60 people who know each other well and have met face-to-face. The process confirms the literature which states that networks need at least 5-7 years before they mature. From the beginning, some gurus in the knowledge domain were involved, as well as the World Bank, an important player in the field of Km4dev. In the beginning there was more sharing of information and resources, lateron people engaged more in asking questions and theories.

The main communication tools are the discussion list, km4dev site (where you can also subscribe to the list), which acts as a repository where members can post profiles, document, etc, and last but not least annual face-to-face workshops. From 2000-2004 Lucy was the sole coordinator for the community, but then a group of 7-8 volunteers was formed who are helping to facilitate, write, interview, etc. A big challenge is to engage the people who can only participate online, versus the group who meets face-to-face. When I asked Lucy about her role, she called it a kind of 'watering', facilitation behind the scene. The watering consisted of asking people to contribute; when hearing a story convincing people to share it and phoning people to find out what's happening.
Geplaatst door Joitske op 11:37 AM

"networks require 5-7 years before they mature"