The picture shows the webroom of the Ghana dot gov project, a portal into Ghana. I was reading about Ghana's telecommunications market, when I came across the fact that the Dutch are the most computer literate in the world. A nice combination for a blog post on technology? 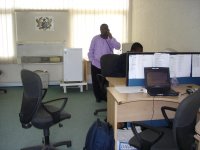 'Residents of the Netherlands, armed with a tax break for computer purchases and some of Europe's lowest broadband fees, lead the world in the use of personal computers and the Internet, according to a study by the Pew Charitable Trusts released Tuesday.
In a survey of habits in 17 nations, 82 percent of Dutch residents said they used a computer at least occasionally at home or at work, and 72 percent used the Internet.'

In Ghana, the number of prepaid and postpaid subscribers has increased from 28,900 in 1997 to 1,2 million in 2005 and predicted to increase to 2,1 million in 2008. The number of new fixed lines per year has decreased from 42,523 in 2000 to 19,471 in 2003. Internet subscription has grown from 505 in 1996 to 33,000 in 2005 (still only 0.152 subscribers per 100 people) But internet users rose from 600 in 1996 to 700,000 in 2005. (source: Telecommunications Market in Ghana, status and outlook, 2005 edition). So lots of areas skip the stage of fixed landlines straight to mobile telephony. And when I phoned from Accra to Tamale with a fixed line, it was extremely expensive, but with a mobile phone it doesn't matter where you are. Unfortunately, broadband is still very expensive, monthly rates dropped from 150 dollars per month to 95 dollars per month in 2003. Which is even high in absolute terms compared to the Netherlands (roughly 17 euros per month), let alone in relative terms. (and hence there were just 1,500 broadband subscribers for the whole of Ghana in 2005).

A study in the UK in 2001 looked into the different uses of the net by broadband and other users. "The analysis suggests that, while there are few socio-economic and demographic differences, broadband users tend to use a wider range of applications, access them more frequently and for longer. However, because most broadband users have been, on average, users of the Internet for longer than PSTN users, these effects may be to do with their Internet competencies rather than the nature of broadband Internet itself. The paper also suggests that the interaction of speed, flat rate and always-on'' is a key feature of broadband and a key value model to the user. "

A community of practice use's of technology is influenced not only by the access of members, but also their internet competencies. Looks like broadband may bring along a different use (at least it did for me, you even forget, but in Ghana with our dial-up of 19 kbps people who would send a large attachment would turn into your instant enemy because it could take ages to download and I used to put off the automatic repetition of the mail in the reply to shorten the mails)...

I don't quite understand what you mean here "... And when I phoned from Accra to Tamale with a fixed line, it was extremely expensive, but with a mobile phone it doesn't matter where you are"

It might be different in Ghana, which I doubted, mobile phone still works the same as fixed line. It is charged by the distance and local or out of state rates etc. (I am simplied VERY much here). For instance, my mobile phone is registered in NL. If I made a call from the UK, I have to pay international rate. There are many combinations of how one should pay by different phone companies ...

Hi Cindy, I will check this out! I had the impression that it doesn't matter if I'm in Accra- phoning to someone in Accra or in Accra phoning to Takoradi. But since I used prepaid I never really checked how much the balance went down. thanks, Joitske

Thank you Emmanuel, I must admit I seem to have more of a 'northern' audience in mind when I blog (otherwise the videos would not make sense eg. or I would leave out the carnaval, but I'm happy for this feedback!!)